How to sniff HTTP traffic from the command line on Linux

Suppose you want to sniff live HTTP web traffic (i.e., HTTP requests and responses) on the wire for some reason. For example, you may be testing experimental features of a web server. Or you may be debugging a web application or a RESTful service. Or you may be trying to troubleshoot PAC (proxy auto config) or check for any malware files surreptitiously downloaded from a website. Whatever the reason is, there are cases where HTTP traffic sniffing is helpful, for system admins, developers, or even end users.

While packet sniffing tools such as tcpdump are popularly used for live packet dump, you need to set up proper filtering to capture only HTTP traffic, and even then, their raw output typically cannot be interpreted at the HTTP protocol level so easily. Real-time web server log parsers such as ngxtop provide human-readable real-time web traffic traces, but only applicable with a full access to live web server logs.

What will be nice is to have tcpdump-like sniffing tool, but targeting HTTP traffic only. In fact, httpry is extactly that: HTTP packet sniffing tool. httpry captures live HTTP packets on the wire, and displays their content at the HTTP protocol level in a human-readable format. In this tutorial, let's see how we can sniff HTTP traffic with httpry.

Install httpry on Ubuntu or Debian

On Debian-based systems, httpry is not available in base repositories. So build it from the source:

Install httpry on CentOS or RHEL

First, enable EPEL repo, and then use yum command:

You can easily build httpry from the source by:

The basic use case of httpry is as follows.

httpry then listens on a specified network interface, and displays captured HTTP requests/responses in real time. 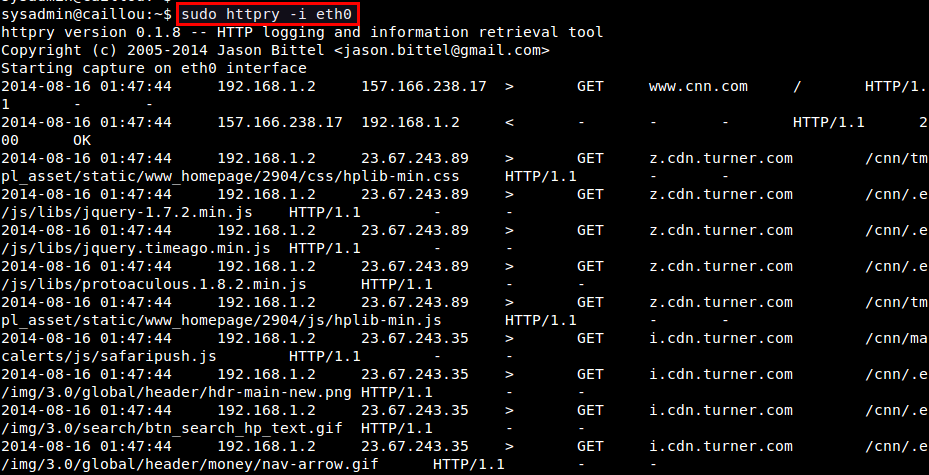 In most cases, however, you will be swamped with the fast scrolling output as packets are coming in and out. So you want to save captured HTTP packets for offline analysis. For that, use either -b or -o options. The -b option allows you to save raw HTTP packets into a binary file as is, which then can be replayed with httpry later. On the other hand, -o option saves human-readable output of httpry into a text file.

To save raw HTTP packets into a binary file:

Note that when you read a dump file with -r option, you don't need root privilege.

To save httpry's output to a text file:

If you want to monitor only specific HTTP methods (e.g., GET, POST, PUT, HEAD, CONNECT, etc), use -m option: 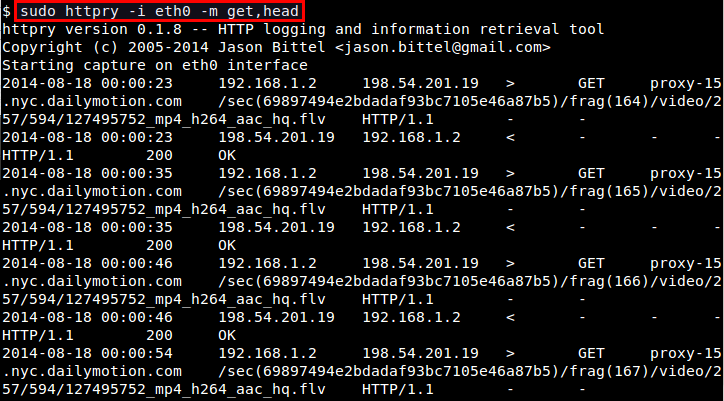 If you downloaded httpry's source code, you will notice that the source code comes with a collection of Perl scripts which aid in analyzing httpry's output. These scripts are found in httpry/scripts/plugins directory. If you want to write a custom parser for httpry's output, these scripts can be good examples to start from. Some of their capabilities are:

Before using these scripts, first run httpry with -o option for some time. Once you obtained the output file, run the scripts on it at once by using this command:

You may encounter warnings with several plugins. For example, db_dump plugin may fail if you haven't set up a MySQL database with DBI interface. If a plugin fails to initialize, it will automatically be disabled. So you can ignore those warnings.

After parse_log.pl is completed, you will see a number of analysis results (*.txt/xml) in httpry/scripts directory. For example, log_summary.txt looks like the following. 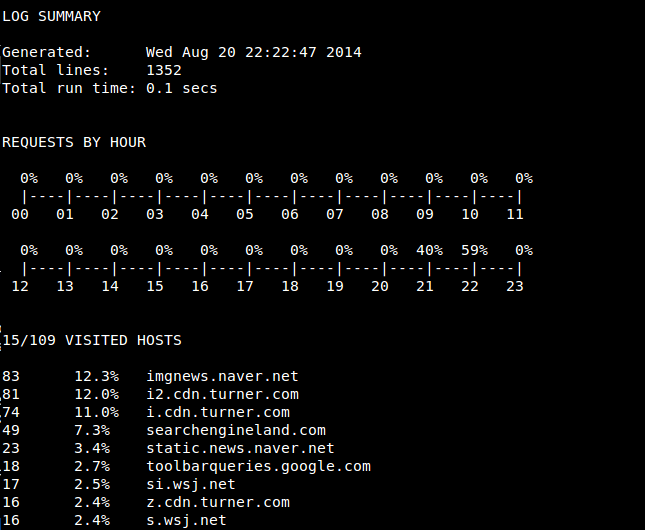 To conclude, httpry can be a life saver if you are in a situation where you need to interpret live HTTP packets. That might not be so common for average Linux users, but it never hurts to be prepared. What do you think of this tool?