What is a good IDE for C/C++ on Linux

A real coder doesn't use an IDE, a real coder uses [insert a text editor name here] with such and such plugins." We all heard that somewhere. Yet, as much as one can agree with that statement, an IDE remains quite useful. An IDE is easy to set up and use out of the box. Hence there is no better way to start coding a project from scratch. So for this post, let me present you with my list of good IDEs for C/C++ on Linux. Why is C/C++ specifically? Because C is my favorite language, and we need to start somewhere. Also note that there are in general a lot of ways to code in C, so in order to trim down the list, I only selected "real out-of-the-box IDE", not text editors like Gedit or Vim pumped with plugins. Not that this alternative is bad in any way, just that the list will go on forever if I include text editors.

Starting all out with my personal favorite, Code::Blocks is a simple and fast IDE for C/C++ exclusively. Like any respectable IDE, it integrates syntax highlighting, bookmarking, word completion, project management, and a debugger. Where it shines is via its simple plugin system which adds indispensable tools like Valgrind and CppCheck, and less indispensable like a Tetris mini-game. But my reason for liking it particularly is for its coherent set of handy shortcuts, and the large number of options that never feel too overwhelming.

I know that I said only "real out-of-the-box IDE" and not a text editor pumped with plugins, but Eclipse is a "real out-of-the-box IDE." It's just that Eclipse needs a little plugin (or a variant) to code in C. So I technically did not contradict myself. And it would have been impossible to make an IDE list without mentioning the behemoth that is Eclipse. Like it or not, Eclipse remains a great tool to code in Java. And thanks to the CDT Project, it is possible to program in C/C++ too. You will benefit from all the power of Eclipse and its traditional features like word completion, code outline, code generator, and advanced refactoring. What it lacks in my opinion is the lightness of Code::Blocks. It is still very heavy and takes time to load. But if your machine can take it, or if you are a hardcore Eclipse fan, it is a very safe option.

With a lot less features but a lot more flexibility, Geany is at the opposite of Eclipse. But what it lacks (like a debugger for example), Geany makes it up with nice little features: a space for note taking, creation from template, code outline, customizable shortcuts, and plugins management. Geany is still closer to an extensive text editor than an IDE here. However I keep it in the list for its lightness and its well designed interface. 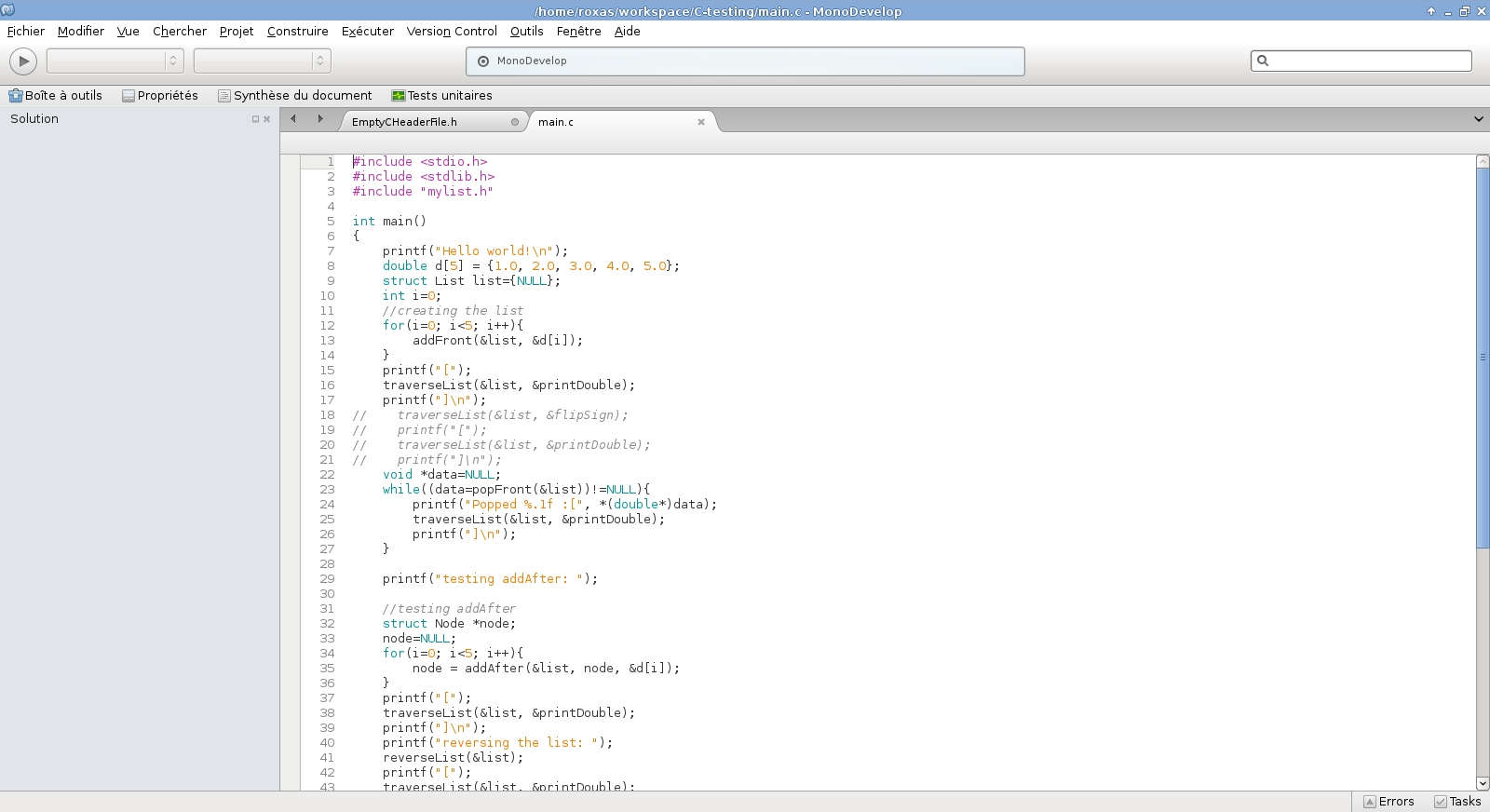 Another monster to add to the list, MonoDevelop has a very unique feel derived from its look and interface. I personally love its project management and its integrated version control system. The plugin system is also pretty amazing. But for some reason, all the options and the support for all kind of programming languages make it feel a bit overwhelming to me. It remains a great tool that I used many times in the past, but just not my number one when dealing with simplistic C.

With a very strong GNOME feeling attached to it, Anjuta's appearance is a hit or miss. I tend to see it as an advanced version of Geany with a debugger included, but the interface is actually a lot more elaborate. I do enjoy the tab system to switch between the project, folders, and code outline view. I would have liked maybe a bit more shortcuts to move around in a file. However, it is a good tool, and offers outstanding compilation and build options, which can support the most specific needs.

I was not very familiar with Komodo Edit, but after trying it a few days, it surprised me with many many good things. First, the tab-based navigation is always appreciable. Then the fancy looking code outline reminds me a lot of Sublime Text. Furthermore, the macro system and the file comparator make Komodo Edit very practical. Its plugin library makes it almost perfect. "Almost" because I do not find the shortcuts as nice as in other IDEs. Also, I would enjoy more specific C/C++ tools, and this is typically the flaw of general IDEs. Yet, very enjoyable software.

Just like Eclipse, impossible to avoid this beast. With navigation via tabs, project management, code outline, change history tracking, and a plethora of tools, NetBeans might be the most complete IDE out there. I could list for half a page all of its amazing features. But that will tip you off too easily about its main disadvantage, it might be too big. As great as it is, I prefer plugin based software because I doubt that anyone will need both Git and Mercurial integration for the same project. Call me crazy. But if you have the patience to master all of its options, you will be pretty much become the master of IDEs everywhere.

For all KDE fans out there, KDevelop might be the answer to your prayers. With a lot of configuration options, KDevelop is yours if you manage to seize it. Call me superficial but I never really got past the interface. But it's too bad for me as the editor itself packs quite a punch with a lot of navigation options and customizable shortcuts. The debugger is also very advanced and will take a bit of practice to master. However, this patience will be rewarded with this very flexible IDE's full power. And it gets special credits for its amazing embedded documentation.

Finally, last for not least, CodeLite shows that you can take a traditional formula and still get something with its own feeling attached to it. If the interface really reminded me of Code::Blocks and Anjuta at first, I was just blown away by the extensive plugin library. Whether you want to diff a file, insert a copyright block, define an abbreviation, or push your work on Git, there is a plugin for you. If I had to nitpick, I would say that it lacks a few navigation shortcuts for my taste, but that's really it.

To conclude, I hope that this list had you discover new IDEs for coding in your favorite language. While Code::Blocks remains my favorite, it has some serious challengers. Also we are far from covering all the ways to code in C/C++ using an IDE on Linux. So if you have another one to propose, let us know in the comments. Also if you would like me to cover IDEs for a different language next, also let us know in the comment section.