How to check hard disk health on Linux using smartmontools

If there is something that you never want to happen on your Linux system, that is having hard drives die on you without any warning. Backups and storage technologies such as RAID can get you back on your feet in no time, but the cost associated with a sudden loss of a hardware device can take a considerable toll on your budget, especially if you haven't planned ahead of time what to do in such circumstances.

To avoid running into this kind of setbacks, you can try smartmontools which is a software package that manages and monitors storage hardware by using Self-Monitoring, Analysis and Reporting Technology (S.M.A.R.T. or just SMART). Most modern ATA/SATA, SCSI/SAS, and solid-state hard disks nowadays come with the SMART system built-in. The purpose of SMART is to monitor the reliability of the hard drive, to predict drive failures, and to carry out different types of drive self-tests. The smartmontools consists of two utility programs called smartctl and smartd. Together, they will provide advanced warnings of disk degradation and failure on Linux platforms.

This tutorial will provide installation and configuration guide for smartmontools on Linux.

Installation of smartmontools is straightforward as it available in base repositories of most Linux distros.

For Ubuntu, Debian and Derivatives:

For CentOS, RHEL or Fedora:

First off, list the hard drives connected to your system with the following command:

The output should be similar to: 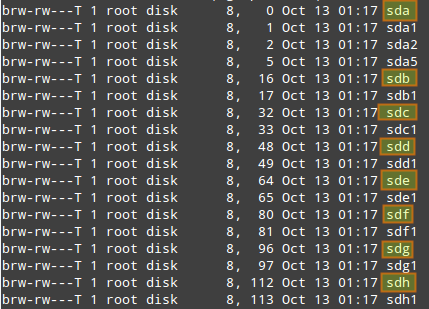 where sdx indicate device names assigned to the hard drives installed on your machine.

In this example, we will choose /dev/sda.

Although the ATA version information may seem to go unnoticed at first, it is one of the most important factors when looking for a replacement part. Each ATA version is backward compatible with the previous versions. For example, older ATA-1 or ATA-2 devices work fine on ATA-6 and ATA-7 interfaces, but unfortunately, that is not true for the other way around. In cases where the device version and interface version don't match, they work together at the capabilities of the lesser of the two. That being said, an ATA-7 hard drive is the safest choice for a replacement part in this case.

You can examine the health status of a particular hard drive with:

In this command, -s on flag enables SMART on the specified device. You can ommit it if SMART support is already enabled for /dev/sda.

The SMART information for a disk consists of several sections. Among other things, READ SMART DATA section shows the overall health status of the drive.

The result of this test can be either PASSED or FAILED. In the latter case, a hardware failure is imminent, so you may want to start backing up your important data from that drive!

The next thing you will want to look at is the SMART attribute table, as shown below.

Basically, SMART attribute table lists values of a number of attributes defined for a particular drive by its manufacturer, as well as failure threshold for these attributes. This table is automatically populated and updated by drive firmware.

At this point you may be thinking, "Yes, smartctl seems like a nice tool. but I would like to avoid the hassle of having to run it manually." Wouldn't it be nice if it could be run at specified intervals, and at the same time inform me of the testsresults?

Fortunately, the answer is yes. And that's when smartd comes in.

Save the changes and restart smartd.

You should expect this kind of email sent by smartd.

Luckily for us, no error was detected. Had it not been so, the errors would have appeared below the line "The following warning/error was logged by the smartd daemon."

Finally, you can schedule tests at your preferred schedule using the -s flag and the regular expression in the form of T/MM/DD/d/HH, where:

T in the regular expression indicates the kind of test:

and the remaining characters represent the date and time when the test should be performed:

For example, to perform a long test every business day at 1 pm for all disks, add the following line to /etc/smartd.conf. Make sure to restart smartd.

Whether you want to quickly check the electrical and mechanical performance of a disk, or perform a longer and more thorough test scans the entire disk surface, do not let yourself get so caught up in your day-to-day responsibilities as to forget to regularly check on the health of your disks. You will thank yourself later!