How to capture TCP SYN, ACK and FIN packets with tcpdump

The packet filtering rules of tcpdump/libpcap also supports more general packet expressions, where arbitrary byte ranges in a packet are checked with relation or binary operators. For byte range representation, you can use the following format:

proto can be one of well-known protocols (e.g., ip, arp, tcp, udp, icmp, ipv6). expr represents byte offset relative to the beginning of a specified protocol header. There exist well-known byte offsets such as tcpflags, or value constants such as tcp-syn, tcp-ack or tcp-fin. size is optional, indicating the number of bytes to check starting from the byte offset.

Using this format, you can filter TCP SYN, ACK or FIN packets as follows.

To capture only TCP SYN packets:

To capture only TCP ACK packets:

To capture only TCP FIN packets:

To capture only TCP SYN or ACK packets: 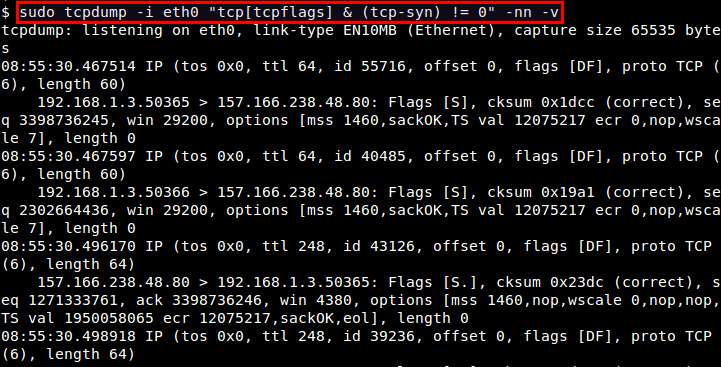