There are many tools which allow a group of users to collaboratively edit a document as a team. Version control systems such as Git or Subversion are common tools that enable collaborative editing. However, these tools only support asynchronous collaboration, where any change is made to a local copy, which is later merged, on demand, to the original version in a repository. As such, you cannot collaborate on documents in real-time under existing version control systems.

Etherpad is a web-based open-source document editor which enables you to collaborate on a document in real-time. Using Etherpad, a group of users can edit a text document via web browser simultaneously, and while doing so, one can see each other's edits in real time. Etherpad also offers a separate chat box within the same web browser window, allowing them to interact during editing.

In this tutorial, I will describe how to set up a web-based real time collaborative document editing system using Etherpad Lite. Etherpad Lite is a version of Etherpad written in server-side JavaScript Node.js.

To install and launch Etherpad Lite on Ubuntu, Debian or Linux Mint:

To install and launch Etherpad Lite on Fedora, CentOS or RHEL:

You should see the initial screen of Etherpad Lite as shown below.

Enter the name of a document (so-called Pad name); new name when creating a new document, or an existing name when opening a previously created document.

Once you open a document with a given Pad name, you will get a URL for the document in the form of http://<ip_address_of_host>:9001/p/<Pad_name>. You can share this URL with whomever you would like to collaborate on the document.

For demonstration purpose, I show two Etherpad-running browser windows below, where edits from one window automatically appear on another window in real-time. Edits made by two users are highlighted in two different colors. Users can also communicate via a separate chat box.

While editing is in progress, any one participating user can checkpoint a current revision of a document by clicking on save button as follows.

You can import any external document into Etherpad, or export a current revision to a separate file. 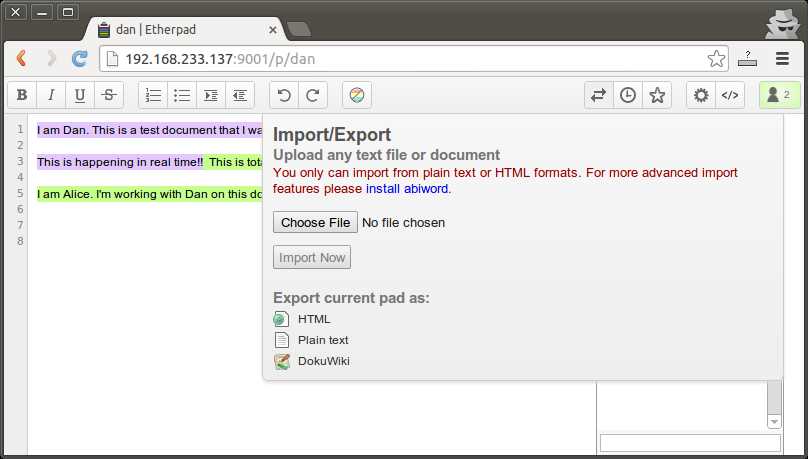 You can embed the Etherpad editor interface into another HTML webpage as an iframe.

By default Etherpad uses a flat-file database to store edited documents. If you want to deploy Etherpad for production use, it is recommended to set up Etherpad with MySQL or MariaDB as a backend database.

Finally, it is possible to deploy Etherpad Lite as a service on a Linux server, and provide secure access to Etherpad Lite via secure HTTPS/SSL connections.