A 48-bit MAC address (e.g., 08:4f:b5:05:56:a0) is a globally unique identifier associated with a physical network interface, which is assigned by a manufacturer of the corresponding network interface card. Higher 24 bits in a MAC address (also known as OUI or "Organizationally Unique Identifier") uniquely identify the organization which has issued the MAC address, so that there is no conflict among all existing MAC addresses.

While a MAC address is a manufacturer-assigned hardware address, it can actually be modified by a user. This practice is often called MAC address spoofing. In this tutorial, I am going to show how to spoof the MAC address of a network interface on Linux.

Why Spoof a MAC Address?

Technical reasons aside, there are also legitimate privacy and security reasons why you wish to hide your real MAC address. Unlike your layer-3 IP address which can change depending on the networks you are connected to, your MAC address can uniquely identify you wherever you go. Call me a paranoid, but you know what this means to your privacy. There is also a well-known exploit called piggybacking, where a hacker snoops on your MAC address on a public WiFi network, and attempts to impersonate you using your MAC address while you are away.

How to Spoof a MAC Address Temporarily

On Linux, you can switch MAC addresses temporarily at run time. In this case, the changed MAC address will revert to the original when you reboot. Note that you will lose your network connection momentarily during MAC address transition. On Linux, there are several easy ways to change a MAC address at run time.

To install macchanger on Ubuntu, Debian or Linux Mint:

To install macchanger on Fedora:

To install macchanger on CentOS or RHEL:

The following examples are some of advanced usages of macchanger. With macchanger, you no longer have to deactivate/reactivate a network interface manually.

To spoof a MAC address to a different value:

To spoof a MAC address to a random value while preserving the same OUI:

To spoof a MAC address to a completely random value:

To get all MAC address OUIs associated with a particular vendor (e.g., Juniper): 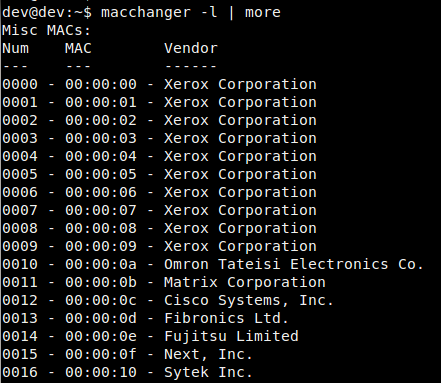 To show the original permanent and spoofed MAC addresses:

How to Spoof a MAC Address Permanently

On CentOS/RHEL or Fedora without Network Manager:

On these systems, you can create a custom startup script in /etc/NetworkManager/dispatcher.d as follows. I assume that you already installed macchanger.

On Debian/Ubuntu without Network Manager:

Create a custom startup script in /etc/network/if-up.d/ as follows.