How to set up NTP server in CentOS

In a corporate environment, if they do not want to open up their firewall for NTP traffic, it is necessary to set up in-house NTP server, and let employees use the internal server as opposed to public NTP servers. In this tutorial, we will describe how to configure a CentOS system as an NTP server. Before going into the detail, let's go over the concept of NTP first.

Why Do We Need NTP?

Due to manufacturing variances, all (non-atomic) clocks do not run at the exact same speed. Some clocks tend to run faster, while some run slower. So over a large timeframe, the time of one clock gradually drifts from another, causing what is known as clock drift or time drift. To minimize the effect of clock drift, the hosts using NTP should periodically communicate with a designated NTP server to keep their clock in sync.

Time synchrony across different hosts is important for things like scheduled backup, intrusion detection logging, distributed job scheduling or transaction bookkeeping. It may even be required as part of regulatory compliance.

NTP clocks are organized in a layered hierarchy. Each level of the hierarchy is called a stratum. The notion of stratum describes how many NTP hops away a machine is from an authoritative time source. 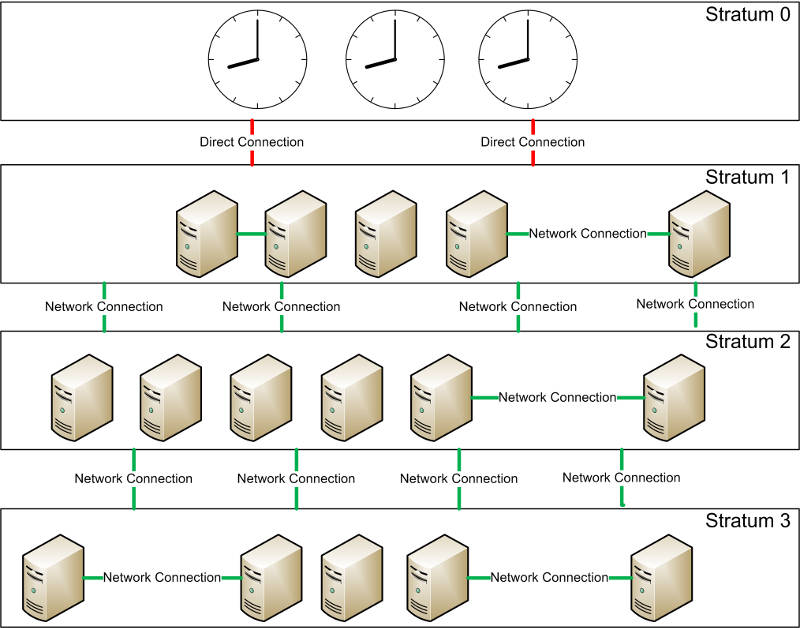 Stratum 0 is populated with clocks that have virtually no time drifts, such as atomic clocks. These clocks cannot be directly used over the network. Stratum N (N > 1) servers synchronize their time against Stratum N-1 servers. Stratum N clocks may be connected with each other over network.

NTP supports up to 15 stratums in the hierarchy. Stratum 16 is considered unsynchronized and unusable.

Now let's proceed to set up an NTP server on CentOS.

First of all, we need to make sure that the time zone of the server is set up correctly. In CentOS 7, we can use the timedatectl command to view and change the server time zone (e.g., Australia/Adelaide)

Go ahead and set up necessary software using yum.

Then we will add the global NTP servers to synchronize time with.

By default, NTP server logs are saved in /var/log/messages. If you want to use a custom log file, that can be specified as well.

If you opt for a custom log file, make sure to change its ownership and SELinux context.

Now initiate NTP service and make sure it's added to startup.

We can use the ntpq command to check how the local server's clock is synchronized via NTP.

By default, NTP server allows incoming queries from all hosts. If you want to filter incoming NTP synchronization connections, you could add a rule in your firewall to filter the traffic.

The rule will allow NTP traffic (on port UDP/123) from 192.168.1.0/24, and deny traffic from all other networks. You can update the rule to match your requirements.

End-hosts need NTP client software (e.g., ntp or Chrony) to synchronize time against the server. The ntp or Chrony package can be easily installed using yum or apt-get. After installing the client package, run the command with the IP address of the server.

If you are using Windows, look for Internet Time under Date and Time settings.

If you want to synchronize the time of a Cisco device, you can use the following command from the global configuration mode.

NTP enabled devices from other vendors have their own parameters for Internet time. Please check the documentation of the device if you want to synchronize its time with the NTP server.

To sum up, NTP is a protocol that keeps the clocks across all your hosts in sync. We have demonstrated how we can set up an NTP server, and let NTP enabled devices synchronize their time against the server.