How to search text files for patterns efficiently

For a system admin or a programmer, grep and the likes are probably the most popular tools when it comes to searching through complex configuration directories and large trees of source code for a particular text string or pattern.

If grep is one of your favorite tools, chances are that you will like ack even more. ack is a Perl-based command-line utility similar to grep, but designed to improve the search speed and capabilities of grep. Especially if you are a programmer, I strongly recommend replacing grep with ack. The usage of ack is heavily optimized for code search, so a programmer like you can perform complex search on source code trees with fewer keystrokes.

To highlight some of the powerful features of ack:

As for search speed, ack is generally faster than grep. The speed of ack comes from its built-in file type filters; ack maintains a list of recognizable file types, and skips unknown/unnecessary file types during search. It also avoids inspecting superfluous metadata directories.

While ack is available as a standard package on major Linux distros (e.g., ack-grep package on Debian-based system, and ack package for Redhat-based system), the version of ack shipped with the distros still remains 1.x, while ack 2.0 with more features has already become available.

So I am going to download and install ack from the official site.

Conveniently, ack is available as a single-file Perl script from the official site, which incorporates all dependent Perl modules in it. So you don't need to install any extra Perl modules to run the script.

To intall ack on your Linux system, go to the official site to download the latest ack.

Note that on Debian-based systems, there is a separate package, also called ack (Kanji code converter). So if you happen to use that package, you will have to rename ack to avoid naming conflicts.

1. Search for "eat" as a word recursively from the current directory. Things like "feature" or "eating" will not be matched.

3. Search for 'about' in all directories other than 'downloads' directory.

4. Search only PHP files which contain 'protected'. Then group search results by file name, and print file name for each search group. 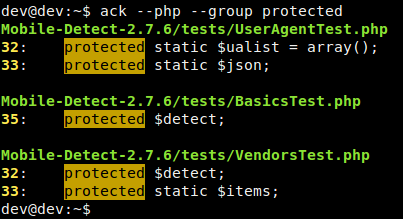 5. Get a list of the names of Makefiles which contain 'CFLAG'. The files named *.mk, makefile, Makefile, GNUmakefile will all be considered.

To get a list of filetypes recognized by ack for filtering, run the following: 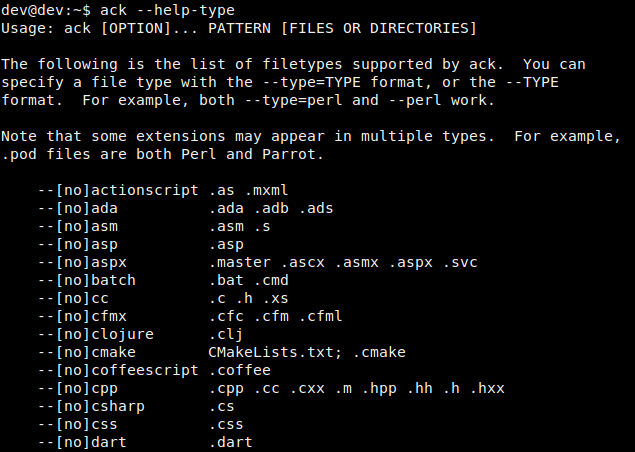