Question: I have an application running, which forks a number of threads at run-time. I want to know how many threads are actively running in the program. What is the easiest way to check the thread count of a process on Linux?

If you want to see the number of threads per process in Linux environments, there are several ways to do it.

The proc pseudo filesystem, which resides in /proc directory, is the easiest way to see the thread count of any active process. The /proc directory exports in the form of readable text files a wealth of information related to existing processes and system hardware such as CPU, interrupts, memory, disk, etc.

The above command will show detailed information about the process with <pid>, which includes process state (e.g., sleeping, running), parent PID, UID, GID, the number of file descriptors used, and the number of context switches. The output also indicates the total number of threads created in a process as follows.

For example, to check the thread count of a process with PID 20571: 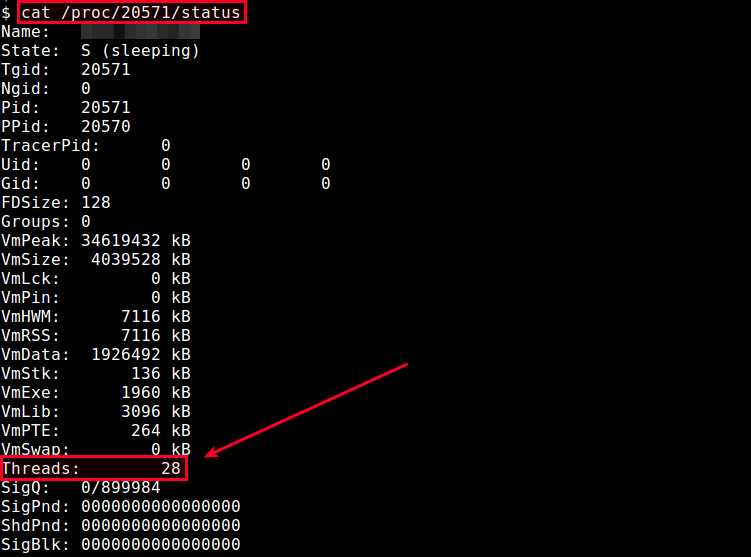 The output indicates that the process has 28 threads in it.

Alternatively, you could simply count the number of directories found in /proc/<pid>/task, as shown below.

If you are an avid user of the versatile ps command, this command can also show you individual threads of a process (with H option). The following command will print the thread count of a process. The h option is needed to hide the header in the top output.

If you want to monitor the hardware resources (CPU & memory) consumed by different threads of a process, refer to this tutorial.