How to mount qcow2 disk image on Linux

Question: I have a qcow2-type disk image which is used by one my guest VMs on QEMU/KVM. I want to modify the content of the disk image without powering on the VM, and for this I need to mount the disk image somewhere. Is there a way to mount a qcow2 disk image on Linux?

When you run a guest virtual machine (VM) on a hypervisor, you create one or more disk images dedicated to the VM. As a virtual disk volume, a disk image represents the content and structure of a storage device (e.g., a hard disk drive or flash drive) attached to the VM. If you want to modify files in a VM's disk image without powering on the VM, you could mount the disk image. You then would be able to modify the content of the disk image before unmounting it.

The first method to mount a qcow2 disk image is by using libguestfs which provides (among other things) a suite of tools for accessing and editing VM disk images. libguestfs supports pretty much all kinds of disk images including qcow2. You can install the libguestfs toolset on Linux as follows.

Once the libguestfs toolset is installed, you can mount a qcow2 image using a command-line tool called guestmount as follows. Note that when a VM is running, you must not mount its disk image in read-write mode. Otherwise, you run the risk of damaging the disk image. Thus, it is safe to always turn off a VM before mounting its disk image.

The -m <device> option is used to specify a partition within the disk image, that you want to mount (e.g., /dev/sda1). If you are not sure what partitions exist in the disk image, you can supply any bogus device name. The guestmount tool will then show you available device names to choose from.

For example, to mount /dev/sda1 in the disk image xenserver.qcow2 at /mnt mount point, run the following.

By default, the disk image is mounted in read-write mode. So you can modify any file in /mnt after mounting it.

If you want to mount it in read-only mode: 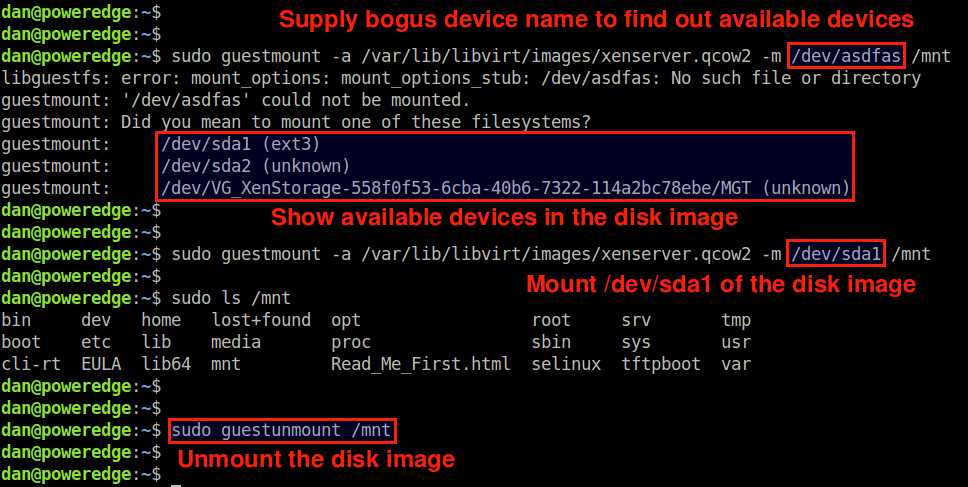 Another method to mount a qcow2 disk image is via qemu-nbd, a command-line tool that exports a disk image as a network block device (nbd).

You can install qemu-nbd on Linux as follows.

To mount a qcow2 disk image, first export the image to nbd as follows.

The first command loads the nbd kernel module. The max_part=N option specifies the maximum number of partitions we want to manage with nbd. The second command exports the specified disk image as a network block device (/dev/nbd0). As a network block device, you can use /dev/nbd0, /dev/nbd1, /dev/nbd2, etc. whichever is unused. As for the disk image, make sure to specify its full path.

After this, existing disk partitions in the disk image will be mapped to /dev/nbd0p1, /dev/nbd0p2, /dev/nbd0p3, etc.

To check the list of nbd-mapped partitions, use fdisk:

Now you will be able to access and modify the content of the disk image's mounted partition via /mnt mount point.

Once you are done, unmount it, and disconnect the disk image as follows. 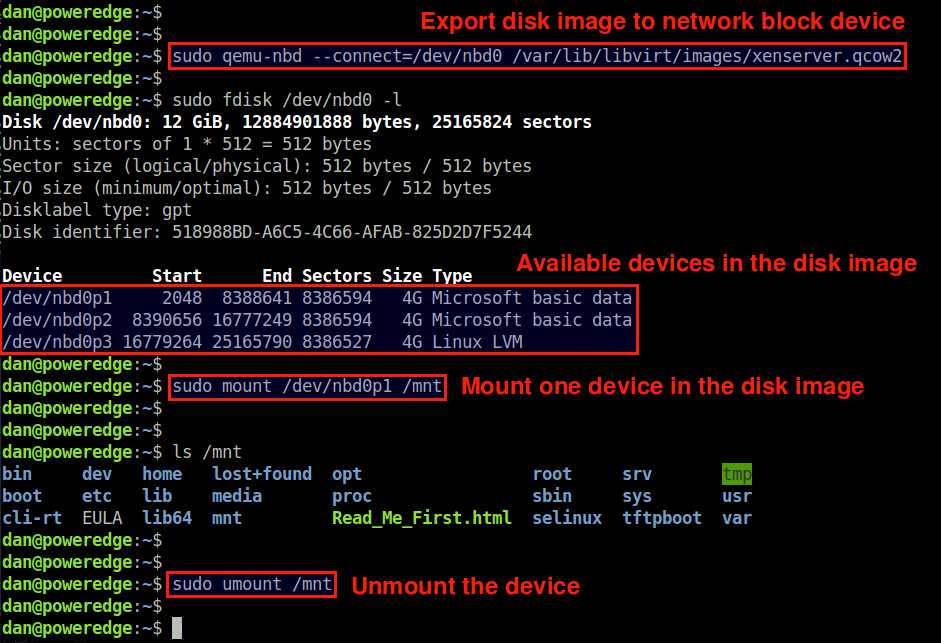