How to mount Google Drive on Linux

In the past, close to 30K people signed up for a online petition, desperately wanting to have an official native Linux client for Google Drive, and yet their voice is still being ignored by Google. Perhaps when it comes to boosting their bottom line, Linux desktop market is not a priority for Google.

They can ignore Linux desktop market all they want, but they cannot ignore the power of FOSS. Faced with the frustration, the open-source community respondded, producing unofficial Google Drive clients such as Grive or SyncDrive. These clients are file synchronization tools which sync files and folders between local file system and remote Google Drive. As such, you cannot mount Google Drive using these tools.

Install google-drive-ocamlfuse on Debian and Ubuntu

These instructions are tested on Debian 10 (buster) and Ubuntu 20.04 (focal). If you have success on other versions of Debian/Ubuntu, let me know.

The first step is to install OPAM. Luckily OPAM is available in the base repository of Debian 10 and Ubuntu 20.04. So simply install it with:

Next, start OPAM as follows. It will ask you a series of questions for OPAM initialization. You can press ENTER each time to choose default answers.

Now go ahead and install external dependencies of google-drive-ocamlfuse with depext. As shown below, several DEB packages (e.g., libfuse-dev libsqlite3-dev, m4) are installed by depext. 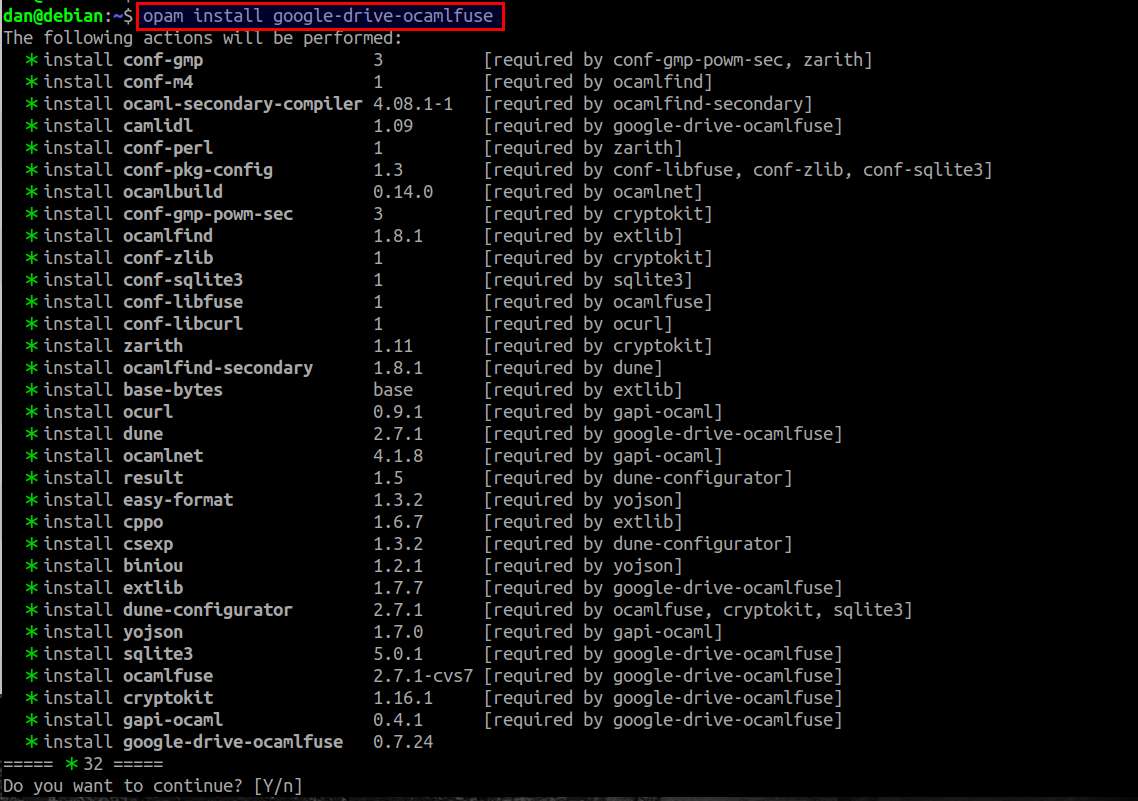 After successful build, the google-drive-ocamlfuse binary will be found in ~/.opam/default/bin. Add this path to your PATH environment variable.

Install google-drive-ocamlfuse on Ubuntu via PPA

These instructions are tested on Fedora 33. If you have success on other versions of Fedora, let me know.

The procedure starts with installing OPAM, which makes installation of google-drive-ocamlfuse painless. OPAM is included in the base repository of Fedora 33.

Next, initialize OPAM as follows. It will ask you a series of questions for OPAM initialization. You can press ENTER each time to accept default answers.

Next, update OPAM package repositories with:

Go ahead and install external dependencies of google-drive-ocamlfuse. As shown below, several RPM packages (e.g., fuse-devel gmp-devel, sqlite-devel) are installed with yum. 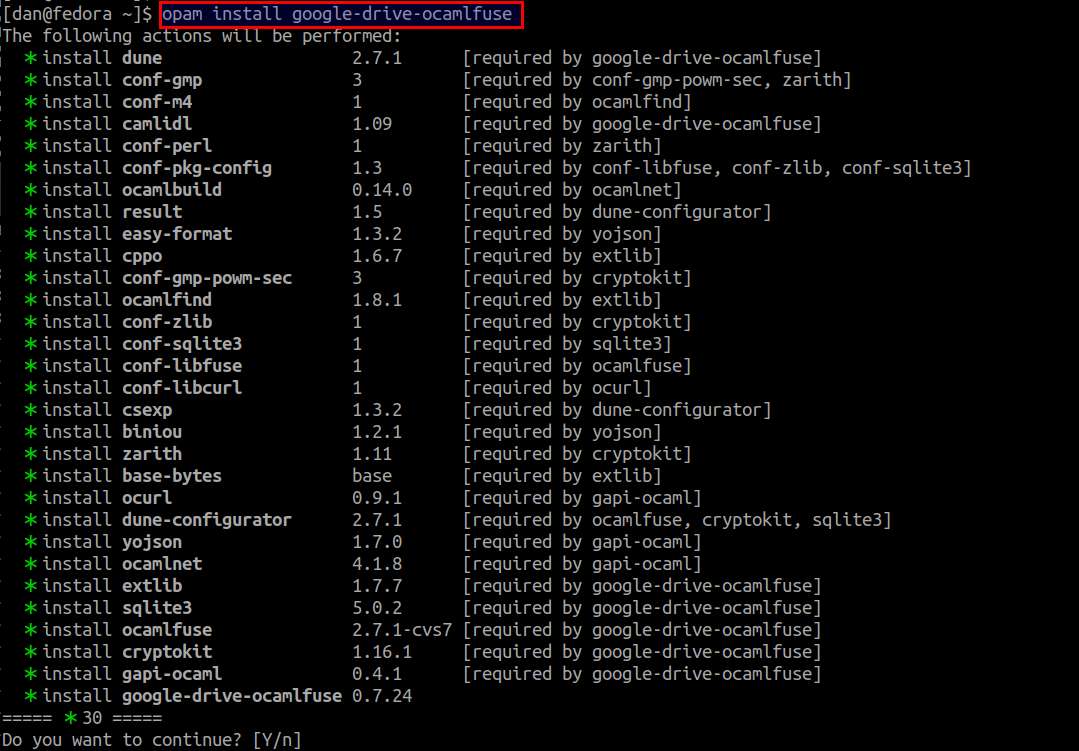 After successful build, the google-drive-ocamlfuse executable will be found in ~/.opam/default/bin. Add this path to your PATH environment variable.

Install google-drive-ocamlfuse on Other Linux Systems

If you want to install google-drive-ocamlfuse on other Linux distros, the easiest way is to first install OPAM. Most modern Linux distributions provide OPAM in their repositories. Once OPAM is installed, the rest of the steps should be the same as Debian, Ubuntu and Fedora described above.

The first step to configure google-drive-ocamlfuse is to run it in your home directory without any argument:

This will open up a web browser window, asking you to log in to your Google account. After logging in, you will see the following screen, requesting for permission. Click on Allow. 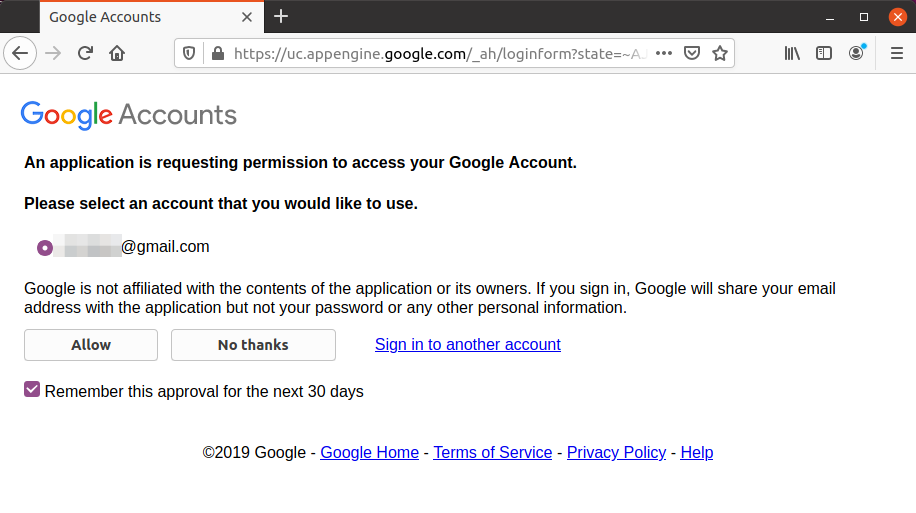 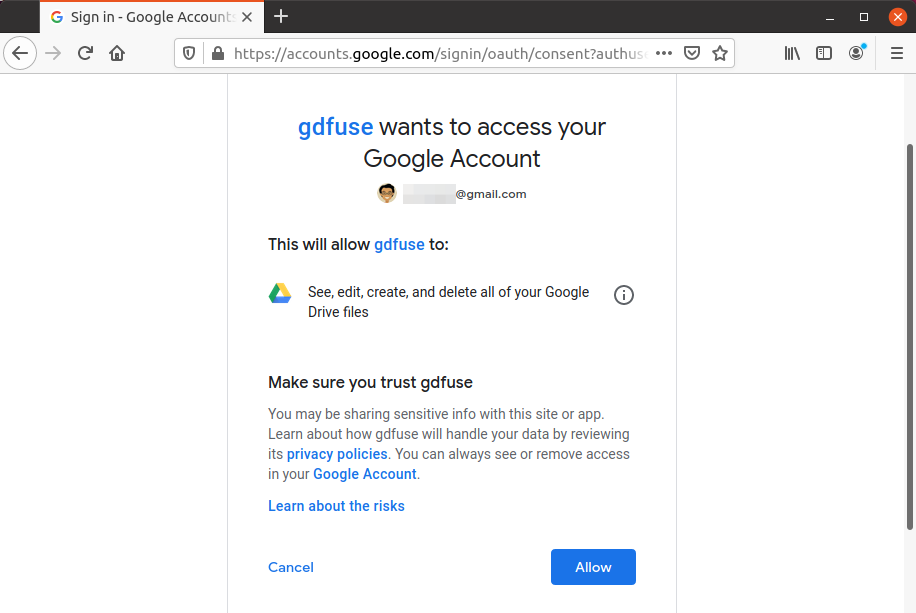 Subsequently, the browser window will say:

At this point, if you go back to the termain window where google-drive-ocamlfuse was launched, you will see the message:

If, for whatever reason, you see the following error, simply restart google-drive-ocamlfuse from the terminal and go through Google authorization steps again.

At this point, the initial configuration is completed. You should see a new directory named ~/.gdfuse/default created, which contains the configuration file config and file cache.

At this point, your Google Drive should be accessible via ~/googledrive. You can use the mount command to verify that.

You can also check how much space is left on your Google Drive account by using df command.

To unmount Google Drive from your file system, simply run:

If you have more than one Google Drive account, you can mount them simultaneously. In this case, use -label option to distinguish between them as follows.

Note that the original Google Drive you mounted without any label in the above is assigned the label called default.

If you want to have Google Drive mounted automatically upon boot, you can use systemd to do that. Create the following systemd unit file. In this example, the user account being used is dan, and the paths for google-drive-ocamlfuse and the mount point are defined accordingly. So adjust them based on your environment.

Now reload systemd and test-run it with:

Verify that the status of the Google Drive systemd service is active:

Now if you reboot your system, your Google Drive account will be automatically mounted and ready for use by systemd.

If you don't want to use systemd, you can also use /etc/fstab or pam_mount to auto-mount Google Drive. Refer to the official document for details.