For those of you system admins and Linux aficionados who spend a great deal of your time in front of Linux screen, do you know that ambient noise from online/local radio station can actually be a productivity booster? Believe or not, it is known that moderate level of ambient sound such as music or chatter can actually fuel your creativity at your workplace. If you like the idea of working with music on, maybe this tutorial is useful to you, as I am going to show you how to listen to Pandora online radio from the command line.

As you already know, Pandora is one of the most well-known Internet radio services, streaming tons of different genres of music for free, with its powerful music recommendation engine. While Pandora can be accessed in different ways such as via web browser, desktop clients or mobile apps, the open-source community has come up with yet another way to access Pandora: Linux command-line.

pianobar is an open-source CLI music player for Pandora Internet radio. It comes with a simple terminal interface for playing and managing music stations. Other features include song rating, upcoming song list, song history, custom keybindings, remote control, etc. For those listeners who live in the region where Pandora is not available (i.e., outside US, Australia and New Zealand), pianobar also comes with proxy support.

On Debian and other Debian-derivatives such as Ubuntu or Linux Mint, pianobar comes as a pre-built package, so installation is as easy as typing:

On Fedora, pianobar is not available in base repositories. So you need to build it from the source. The whole installation process is a bit involved, but the following instructions will do it. The instructions were tested on fresh Fedora 20.

First, compile and install FFmpeg from the source using this guide.

Next, enable RPM Fusion repo, and install other prerequisites:

and reload all shared libraries:

Listen to Pandora from the Command Line

The basic usage of pianobar is as simple as typing the command:

You will be asked to log in to Pandora, and choose a station from your personalized station list. Once you pick a station, music streaming will start automatically.

Pressing ? key during streaming will show you a list of available command keys. Some of them are: 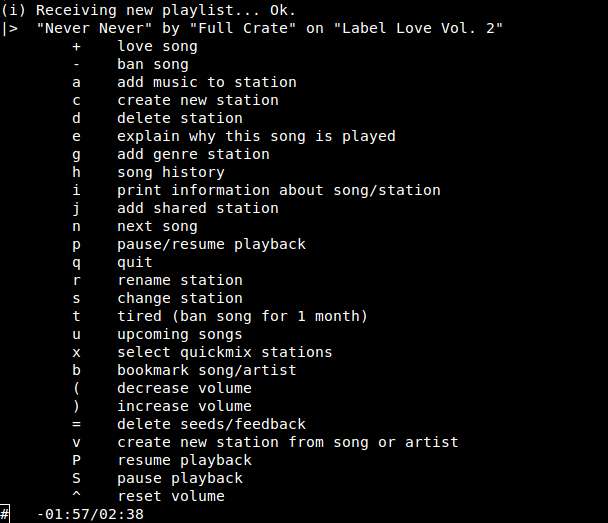 For full configuration options, refer to its man page.

First create a FIFO in ~/.config/pianobar:

Now you can send any single-character command key to pianobar by using echo command. For example, to go to the next song:

You can easily extend this setup to a remote machine. When pianobar is running on host X, you can remote control pianobar from another host Y over SSH as follows.

Of course, you want to enable key authentication for SSH login to host X, so that you don't have to type an SSH password.

This remote control feature can come in handy when you want to set up a remote controllable Internet radio player on Raspberry Pi.

Hope you enjoy pianobar as much as I do. Let me know what you think of it in the comments.