How to install Xen hypervisor on unused old hardware

Xen is a bare metal hypervisor, meaning that you must prepare a bare machine to install and run Xen. KVM is a little different - you can add it to any machine already running Linux. This tutorial describes how to install and configure Xen hypervisor on unused hardware.

This procedure uses Debian Jessie (their testing distribution) as the host OS (also known as Dom0). Jessie is not the only choice - Xen support is built into the Linux kernel, and plenty of Linux distributions include one of these Xen-enabled kernels.

As a start, find a suitable workstation which can be wiped out, such as an old laptop or desktop. Older hardware may not be good for gaming, but it is good enough for a host OS and a couple of guests. A PC with these specifications works fine.

Note that the CPU must be a 64-bit processor since Debian dropped support for 32-bit Xen packages. If you don't have spare hardware, you could invest in an old machine. 2010's $1000 flagship laptop is today's $100 bargain. A second-hand laptop from eBay and a memory upgrade will do fine.

Next, identify the device name assigned to your CD/DVD or USB drive (e.g., /dev/sdc).

Burn the downloaded ISO image into a bootable CD or a USB using dd command. Replace /dev/sdc with the device name you identified above.

To start the installation, boot with the Debian installer CD/USB.

It's a good idea to use a wired connection, not WiFi. If the WiFi won't connect because firmware or driver software is missing, you won't get very far.

Install the Base System

It's a good idea to make the install as simple and short as possible. A basic working system can always be added to later. Debian's APT (Advanced Package Tool) makes adding software easy. Installing Debian on a workstation can cause pretty obscure time-wasting issues. Perhaps a graphics driver does not agree with the kernel or maybe the old CD-ROM drive only works intermittently.

When it comes to choosing what to install, do install an SSH server and don't install a desktop like Gnome.

A graphical desktop requires hundreds of package installs - it's a lot of extra work that can be done later. If you run into problems, waiting for that desktop install is a waste of time. Also, without desktop component, the system boot will be much quicker - seconds rather than minutes. This procedure requires a few reboots, so that's a handy time-saver.

An SSH server lets you configure the workstation from another computer. This allows you to avoid some of the problems with old hardware - perhaps the old machine's keyboard is missing keys, the LCD screen has dead pixels or the trackpad is unresponsive etc.

Install the LVM tools as the root.

Pick a physical volume to work with.

You don't need to create a logical volume. If you want to test LVM works, create a volume then delete it.

We are going to set up a Linux bridge so that all Xen's guest domains can be connected to, and communicate through the bridge.

See what interfaces are configured.

In this example, we have one primary interface assigned eth0. We are going to add eth0 to the Linux bridge by editing the network configuration file (/etc/network/interfaces).

Change the file to this.

Verify that a Linux bridge xenbr0 is created successfully.

Also check that the primary interface eth0 is successfully added to the bridge.

You now have a working machine with Jessie installed. Xen is not yet installed at this point. Let's proceed to install Xen next.

Install Xen and QEMU packages, and update the GRUB bootloader.

When the GRUB screen appears, you can see extra booting options listed. 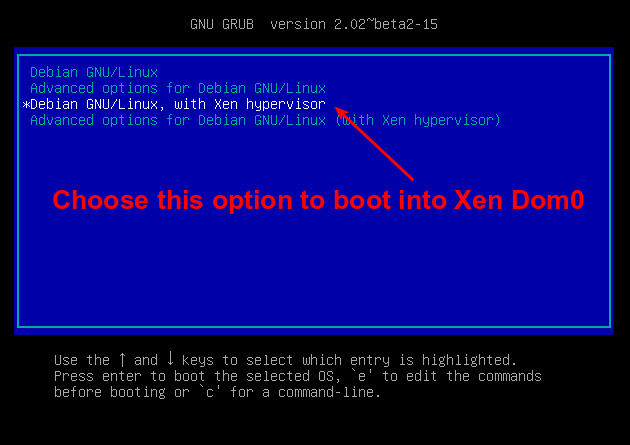 The first option will boot automatically in five seconds (see the GRUB_TIMEOUT line in /etc/default/grub), so this is not the time to get a coffee.

Press the down arrow to highlight the option Debian GNU/Linux, with Xen hypervisor, and press RETURN. Many lines of information appear, followed by the usual login screen.

Xen hypervisor comes with Xen management command-line tool called xl, which can be used to create and manage Xen guest domains. Let's use xl command to check if Xen is successfully installed.

which will display various information about Xen host. 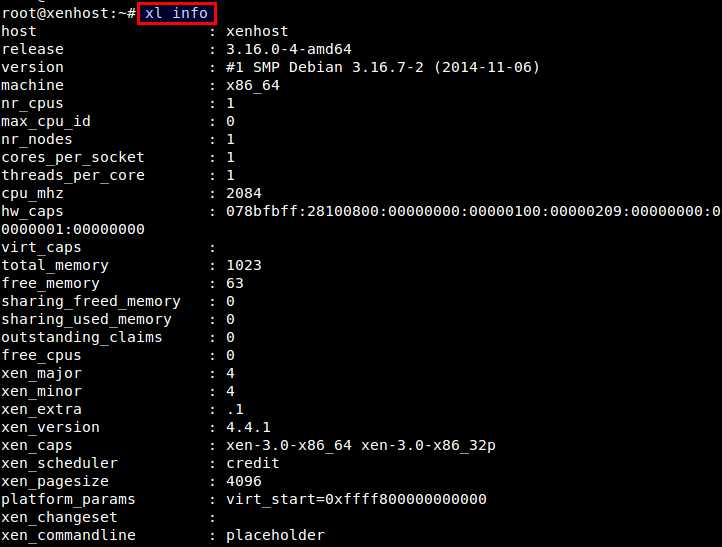 A little table of domains appears. Without any Xen guest domain created, the only entry should be Domain-0, your Debian installation.

When you reach this point, the Xen install is complete. There is one more thing to fix - the default boot will not load Xen. GRUB chooses the first item in the boot menu (Debian GNU/Linux), not the third (Debian GNU/Linux, with Xen hypervisor).

Then update the GRUB configuration file.

If you use this machine as your hands-on workstation, install a graphical desktop. The Debian library includes a few desktop environments. If you want a graphical desktop that includes everything and the kitchen sink, go for Gnome. If graphics just get in your way, try Awesome.

Note that the Debian Jessie default environment Gnome comes with a huge amount of extra applications including the productivity suite LibreOffice, the Iceweasel web browser and the Rhythmbox music player. The install command apt-get install gnome adds 1,000 packages and takes up nearly 2GB of disk space. Running this heavyweight desktop takes up 1GB of memory.