How to mount a remote directory over SSH on Linux

To install sshfs on Ubuntu or Debian:

To install sshfs on CentOS, RHEL or Fedora, first enable EPEL repository on your system, and then run the following.

Mount a Remote Directory over SSH with sshfs

If you want to use sshfs as a non-root user, you need to add the user to a group called fuse. That is:

Finally, you can mount a remote directory using sshfs as follows.

To unmount an ssh-mounted directory:

If you would like to automatically mount over ssh upon boot, set up passwordless ssh login, and append the following in /etc/fstab.

Mount a Remote Directory Over SSH on GNOME Desktop

To mount a remote folder over SSH with Nautilus, go to File → Connect to Server on Nautilus. Then type in the remote SSH server information, remote folder path, as well as ssh login credentials as follows. 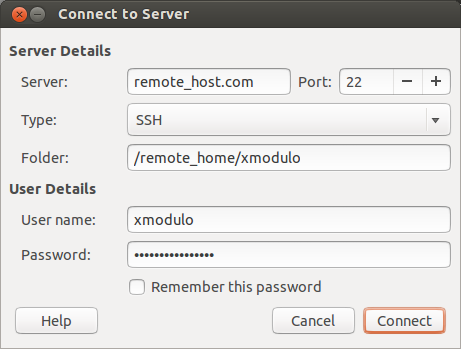 Once you click on Connect button, a local mount point will automatically be generated, and a remote directory will be mounted there via gvfs. To check a gvfs mount point, run the following.

In this example, the local gvfs mount point is as follows. You can access a remote directory either via command-line at this mount point, or through Nautilus GUI.