How to configure a host intrusion detection system on CentOS

One of the first safety measures that any sysadmin may want to implement in their production servers is a mechanism to detect file tampering - not only the content of files, but also their attributes.

AIDE builds a database of file attributes by scanning the file system of a (untampered) Linux server. It then checks the server's file attributes against the database, and alerts of any changes made to the indexed files while the server is running. For this very reason, AIDE must reindex protected files every time the system is updated or configuration files are changed for legitimate reasons.

For some clients, their security policies may mandate some sort of IDS installed on their servers. But whether a client requires it or not, it's a good sysadmin practice to have IDS in place.

Installing AIDE on CentOS or RHEL

An initial installation (along with the first run) of AIDE is best performed in a system where the operating system has just been installed, and none of the services is exposed to the Internet or even to a local area network. At this early stage, we can minimize the risk of any break-ins and tampering attempts coming from outside. In fact, it is the only way to ensure that the system is clean at the time AIDE builds its initial database.

For that reason, after we install AIDE using:

we need to unplug our machine from the network, and perform some basic configuration tasks as described next.

The default configuration file can be found in /etc/aide.conf. This file presents several example protection rules (e.g., FIPSR, NORMAL, DIR, DATAONLY), each of which is followed by an equal sign and a list of file attributes to check for, or any predefined rules (delimited by a plus sign). You can also define any custom rules using this format.

The defined rules can be used for different directories and files (denoted with regular expressions) flexibly.

An exclamation sign (!) preceding an entry tells AIDE to ignore a subdirectory (or files inside a directory) for which another rule can be defined.

Defining and applying the right rules to the right locations in your system is perhaps the most difficult part of using AIDE, but using a good judgement is a nice start. As a rule of thumb, do not check for more attributes than necessary. For example, checking mtime for files inside /var/log or /var/spool will certainly result in a lot of false positives because there are many applications and daemons often writing to these locations, which is perfectly fine. In addition, checking for multiple checksums may enhance security at the expense of AIDE's increased running time.

Optionally, you can have the results of the check mailed to you if you specify your email address with the MAILTO variable. Place the following line anywhere in /etc/aide.conf.

Running AIDE for the First Time

Run the following command to initialize the AIDE database:

Now it's time to perform our first system check against the database. For that, simply run:

When called with no options, AIDE assumes --check.

If no change was made since the database had been created, AIDE will finish with an OK message.

Managing AIDE in a Production Environment

After constructing an initial AIDE database, you often need to update a protected server for various legitimate reasons as part of ongoing system administration activities. Every time your server has been updated, you must re-build the AIDE database to incorporate the change in the database. For that, use this command:

To protect a production system with AIDE, it is probably best to schedule a cron job for checking for any inconsistencies with AIDE periodically. For example, to schedule AIDE to run and have the result mailed to an email address on a daily basis:

The following test scenarios will demonstrate how AIDE check the integrity of our files.

Let's change file permissions, and see if it can be detected. 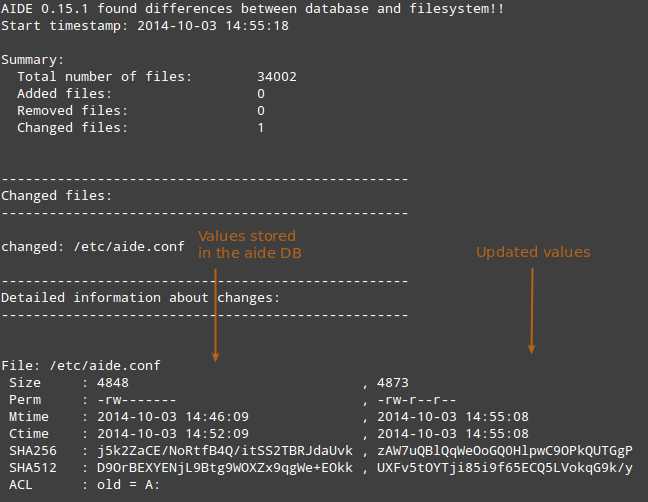 If you ever find yourself in a situation where you have good reasons to think that a system has been tampered with, but are unable to determine what might have been changed at first sight, a host-based intrusion detection system like AIDE can be very helpful in that it can help you quickly identify what has changed instead of guessing and wasting valuable time.