What is a good subtitle editor on Linux

If you watch foreign movies regularly, chances are you prefer having subtitles rather than the dub. Grown up in France, I know that most Disney movies during my childhood sounded weird because of the French dub. If now I have the chance to be able to watch them in their original version, I know that for a lot of people subtitles are still required. And I surprise myself sometimes making subtitles for my family. Hopefully for me, Linux is not devoid of fancy and open source subtitle editors. In short, this is the non-exhaustive list of open source subtitle editors for Linux. Share your opinion on what you think of the best subtitle editor. 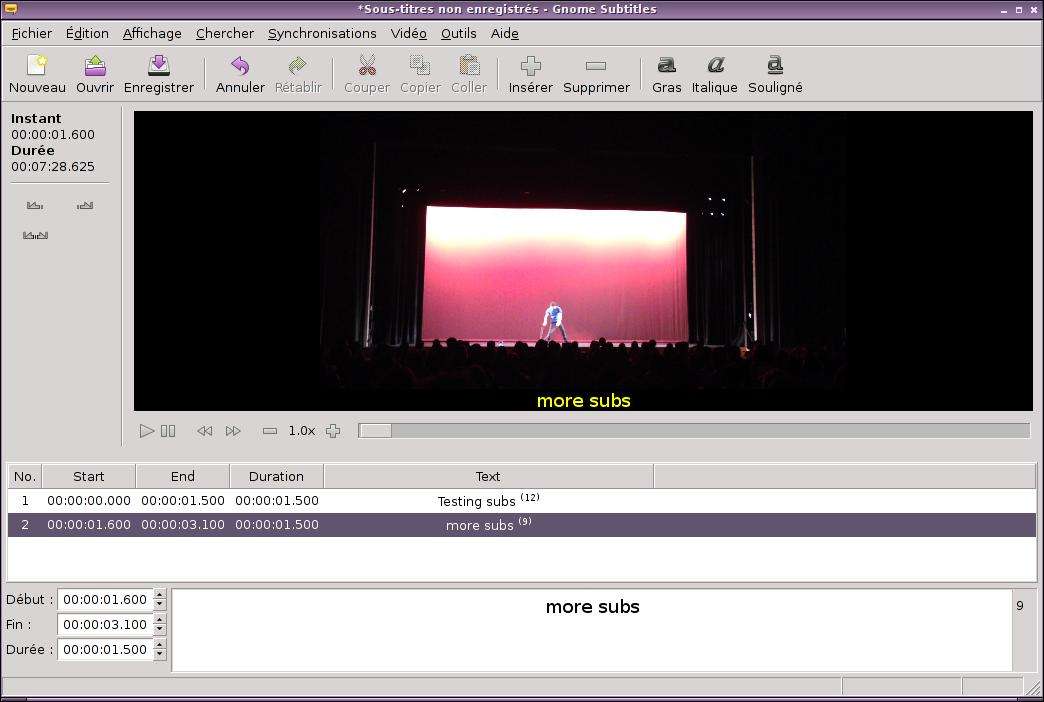 Gnome Subtitles is a bit my go to when it comes to quickly editing some existing subtitles. You can load the video, load the subtitle text files and instantly get going. I appreciate its balance between ease of use and advanced features. It comes with a synchronization tool as well as a spell check. Finally, last but not least, the shortcuts are what makes it good in the end: when you edit a lot of lines, you prefer to keep your hands on the keyboard, and use the built in shortcuts to move around.

Aegisub is already one level of complexity higher. Just the interface reflects a learning curve. But besides its intimidating aspect, Aegisub is very complete software, providing tools beyond anything I could have imagined before. Like Gnome Subtitles, Aegisub has a WYSIWYG approach, but to a whole new level: it is possible to drag and drop the subtitles on the screen, see the audio spectrum on the side, and do everything with shortcuts. In addition to that, it comes with a Kanji tool, a karaoke mode, and the possibility to import lua script to automate some tasks. I really invite you to go read the manual page before starting using it. 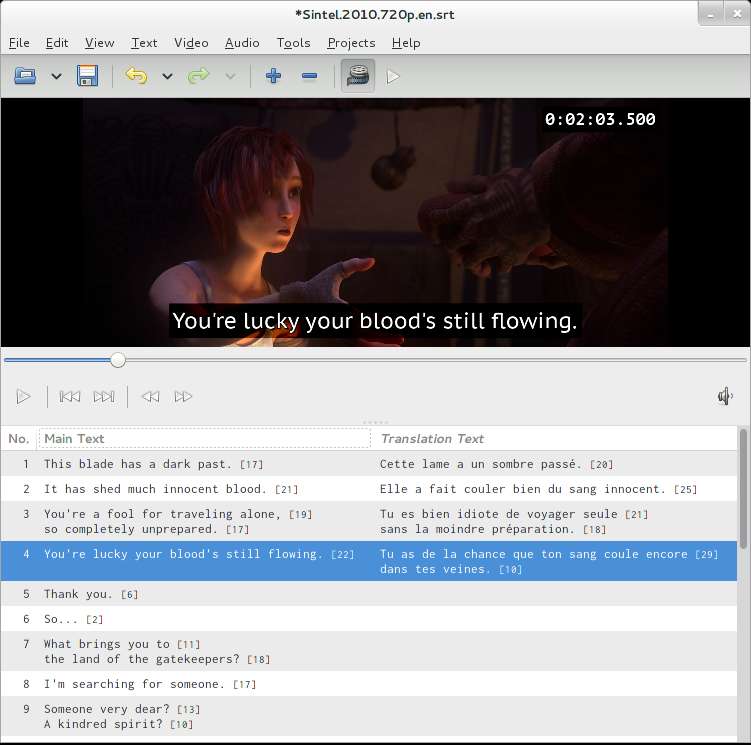 At the other end of the complexity spectrum is Gaupol. Unlike Aegisub, Gaupol is quick to pick up and adopts an interface very close to Gnome Subtitles. But behind this relative simplicity, it comes with all the necessary tools: shortcuts, third party extension, spell checking, and even speech recognition (courtesy of CMU Sphinx). As a downside, however, I did notice some slow-downs while testing it, nothing too serious, but just enough to make me prefer Gnome Subtitles still.

Subtitle Editor is very close to Gaupol. However, the interface is a little bit less intuitive, and the features are slightly more advanced. I appreciate the possibility to define "key frames" and all the given synchronization options. However, maybe more icons and less text would enhance the interface. As a goodie, Subtitle Editor can simulate a "type writer" effect, while I am not sure if it is extremely useful. And last but not least, the possibility to redefine the shortcuts is always handy. 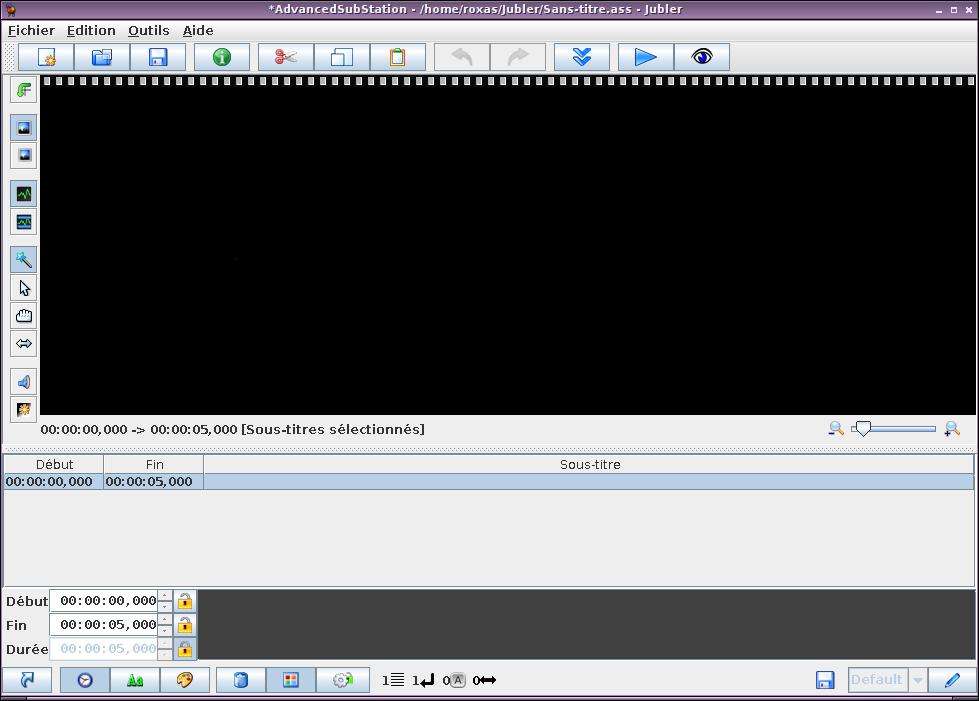 Written in Java, Jubler is a multi-platform subtitle editor. I was actually very impressed by its interface. I definitely see the Java-ish aspect of it, but it remains well conceived and clear. Like Aegisub, you can drag and drop the subtitles on the image, making the experience far more pleasant than just typing. It is also possible to define a style for subtitles, play sound from another track, translate the subtitles, or use the spell checker. However, be careful as you will need MPlayer installed and correctly configured beforehand if you want to use Jubler fully. Oh and I give it a special credit for its easy installation process after downloading the script from the official page. 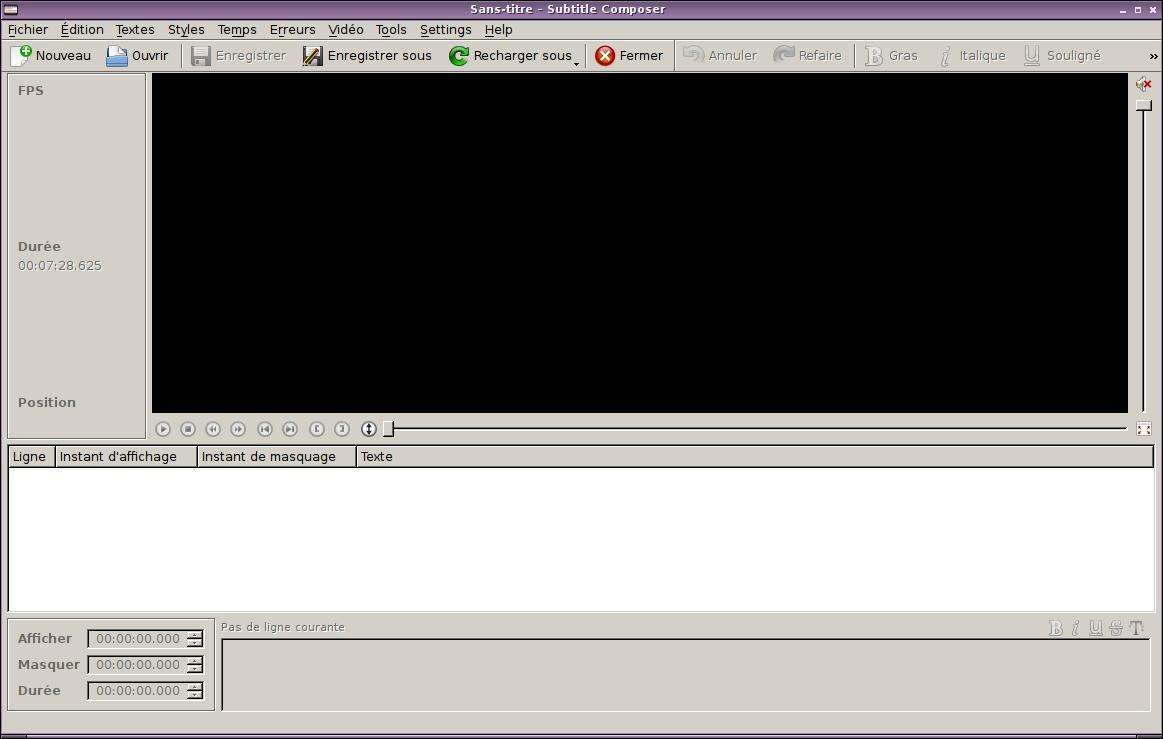 Defined as a "KDE subtitle composer," Subtitle Composer comes with most of the traditional features evoked previously, but with the KDE interface that we expect. This comes naturally with the option to redefine the shortcuts, which is very dear to me. But beyond all of this, what differentiates Subtitle Composer from all the previously mentioned programs is its ability to follow scripts written in JavaScript, Python, and even Ruby. A few examples are packaged with the software, and will definitely help you pick up the syntax and the usefulness of such feature.

To conclude, whether you, like me, just edit a few subtitles for your family, re-synchronize the entire track, or write everything from scratch, Linux has the tools for you. For me in the end, the shortcuts and the ease-of-use make all the difference, but for any higher usage, scripting or speech recognition can become super handy.

Which subtitle editor do you use and why? Or is there another one that you prefer not mentioned here? Let us know in the comments.