What is a good command-line IRC client on Linux

Now replaced more and more by forums, social networks, or mailing lists, IRC was once the method of communication on the Internet. And if it stands today as the last bastion of hackers and bearded Linux users, it remains one of the fastest and most specific channel of communication. If you have a technical difficulty, or just want some company, there is an appropriate IRC channel for you. And if you are tired of the YouTube comment section and its torrent of hate, IRC people are in general much more behaved (and moderated). So in short, here is a non-exhaustive list of IRC console clients. Why console? Because if you go down there, you might as well do it in style. 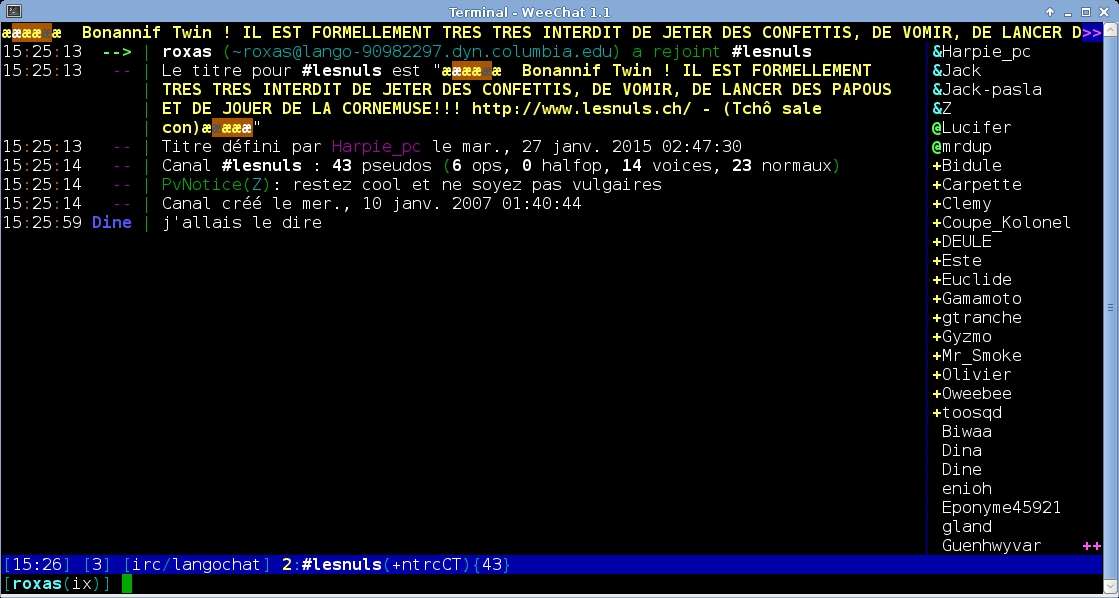 As usual, we shall start with my personal favorite: WeeChat. Written in C and designed to be light and stable, WeeChat integrates two fundamental elements, a relative ease of use and a high degree of customization. It supports IPv6, SSL encryption, proxy relay, screen splitting, fancy shortcuts, and top notch character encoding. However, its real strength lies in its scripting support. Indeed, anyone can code a little script, in C, Python, Perl, Ruby, or some other classy language, and propose it to the community. The result is a huge library that you can browse and use to customize your client to its core. 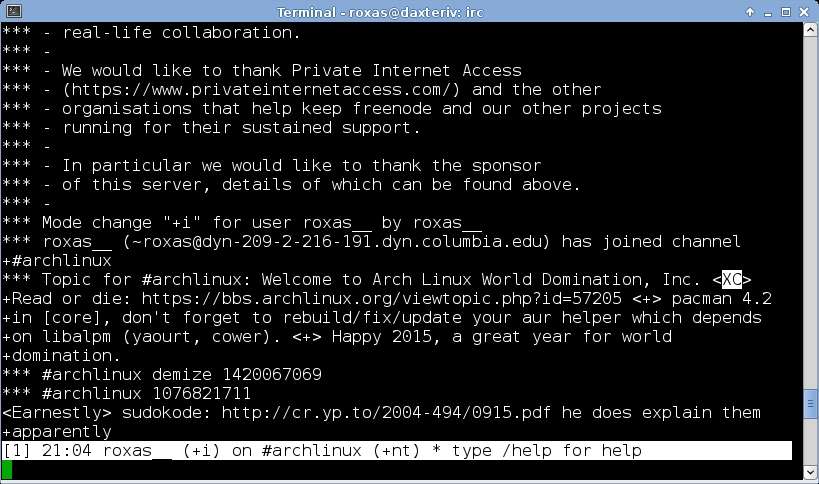 Difficult to ignore it, ircII is the oldest IRC client still maintained today. Setting the standard for fast and stable client, ircII remains completely functional, even if the interface does reflect its time. I would still recommend it as it is easy to use once you know the command conventions a little bit. But do not expect anything fancy. 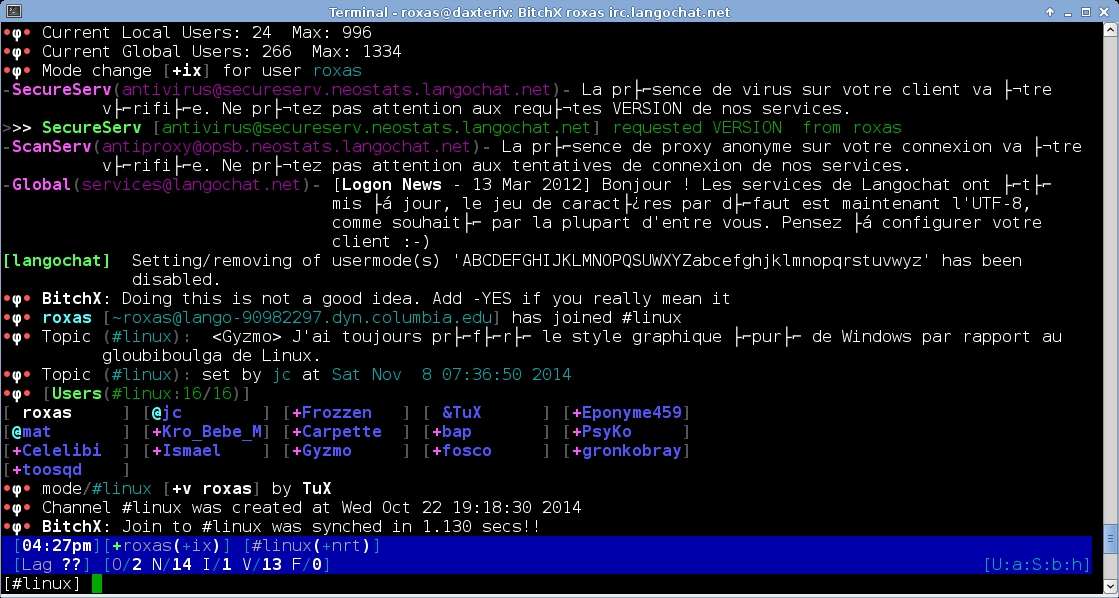 Described on Wikipedia as "the most popular ircII-based IRC client," BitchX does hide its true nature behind its peculiar name. Also written in C, BitchX is a good example of complete IRC client which works out of the box. After getting a splendid splash screen, all you need to do is connect to a server, and join a channel. Nothing else is strictly required. The interface is typical and colorful. Special credit for the way the participants of a chat room are displayed. The only imperfection in my eye is the apparent lack of documentation online, compared to WeeChat for example. 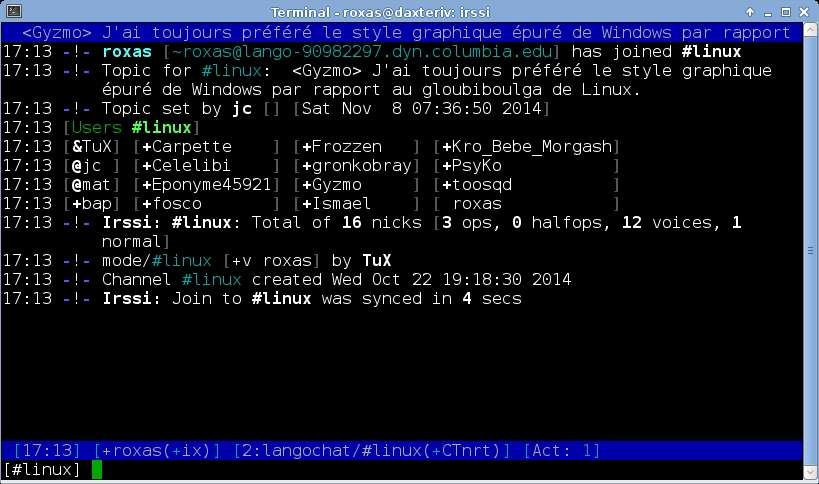 Also a very popular client, Irssi has been recommended to me a couple of times. On the bench we have: autologging, customizable theme and shortcuts, proxy support, and scripting. But I think that the most original feature I have seen so far is the so-called "paste detection" which detects when you are copy pasting some text into a channel and disables certain features like tab-completion. Regarding the interface, we are on something standard, maybe a bit less colorful and flashy than BitchX. I give special acknowledgment to the extensive online documentation and support, along with the impressive library of themes and scripts. 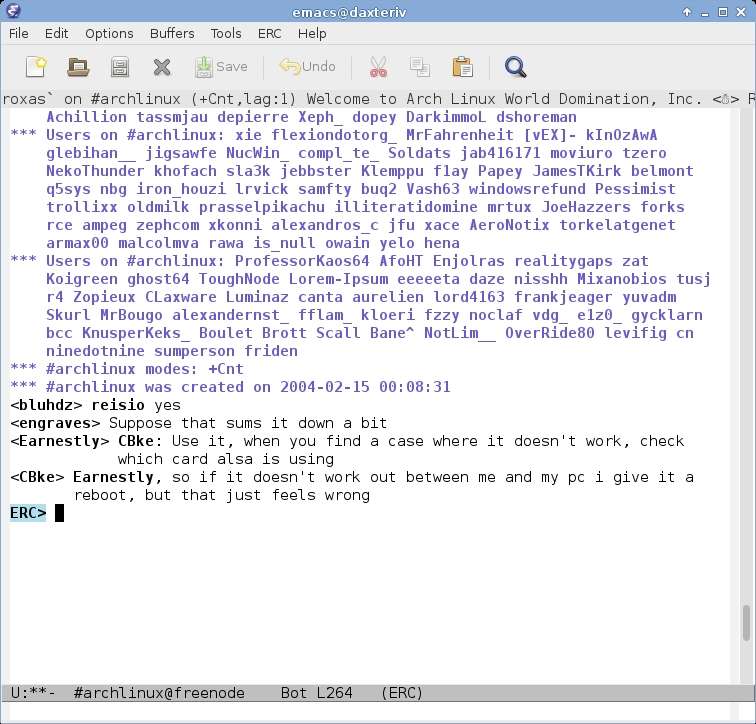 For all of you Emacs lover, ERC is a powerful IRC client integrated in your favorite editor. Since Emacs is not really my thing, I am not the best person to talk about this, but it remains a great idea on the paper. From what I tested, the client is responsive and easy to use. It follows the conventions in term of keywords and commands, and the interface is very "Emacs-like." As always, props for the online documentation, which includes a sample session if you just want to get started immediately. Now the real question is: do you need an IRC client inside your text editor? #Troll 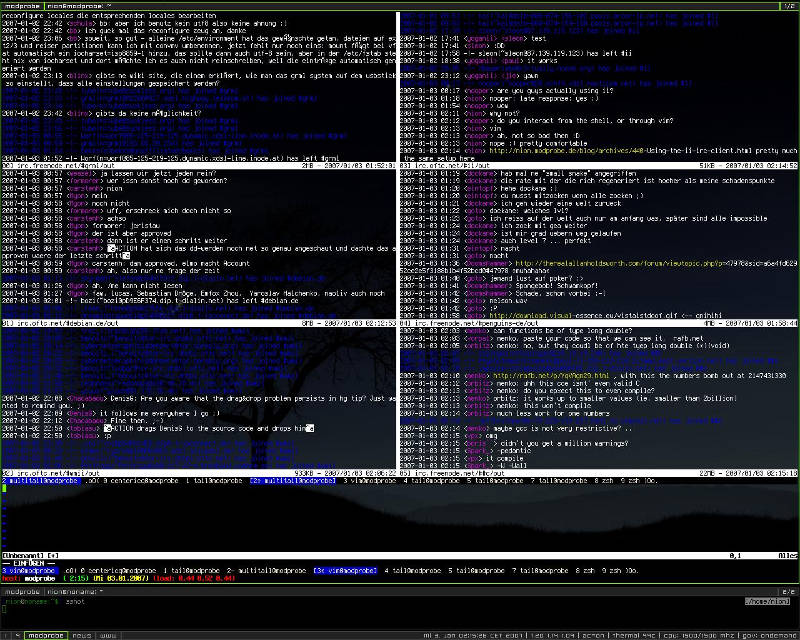 On the other side of the spectrum lies ii, an ultra minimalist IRC client. You launch the program from the command line, giving it the server address, port number, and your nickname. From there, ii creates two FIFO files, one that spits out the discussion, and the other that you can pipe text into to send to the chat room. Is this the Unix concept taken too far? Maybe. But it remains extremely functional and amazing. I imagine that you can couple ii with a couple of scripts or even your own GUI in order to make it more personal. In any case, it is worth checking out just for the experience.

Defined as "the little brother of ii," sic also takes on a minimalist approach to IRC chatting. The official website also mentions that the program is coded with less than 250 lines, and while that is not completely true (I counted 284), it is still super impressive. However, like ii, I don't think that anyone should use sic out of the box. It remains a curiosity, or a good way to learn more about networking in C if you are interested. Still worth putting on this list. 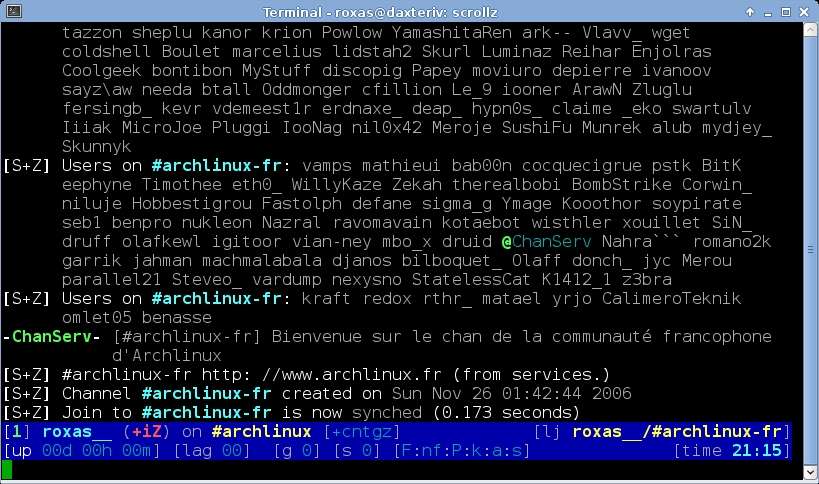 Also based on ircII, Scrollz brought color, an internal user list, and an overall protection improvement compared to its ancestor. Despite those enhancements, we can see it as a more modern version of ircII, and while that does not make it a bad program at all, it makes it quite basic. I would recommend it if you are looking for something really lightweight, yet not completely Spartan in terms of interface.

To conclude, you have now room to experiment with all these clients. While WeeChat is my favorite, I cannot help but to envy Emacs users for ERC, or respect ircII for its contribution. As usual, the best client is always the one corresponding best to your needs, but I imagine that a lot of needs involve graphical user interface.

Do you use IRC? Would you pick a command line based client over GUI one? Or did we not mention your favorite client on the list? Let us know in the comments.