Question: I am trying to use sudo to run some privileged command on my Linux. However, when I attempt to do so, I am getting "[my-user-id] is not in the sudoers file. This incident will be reported." error message. How can I resolve this sudo error?

sudo is a program which enables specific groups of users to run a command with the privilege of another user (typically root). sudo comes with detailed logging capability, and offers finer granular control over which user can type what commands via sudo.

The su command also offers similar privilege escalation capability. Difference between sudo and su is their authentication process and the granularity of priviledge change. su allows you to switch your login session to another user's, where you can then run any arbitrary programs with the user's privilege as many times as you want. You will have to know the target user's password to switch to the user though. On the other hand, sudo works on a per-command basis, allowing you to run a single command with root privilege. To use sudo, you don't have to know the root password, but enter your own password at sudo password prompt.

As a new user, if you attempt to run sudo command, you will encounter the following error. This means that you are not in the sudoers list which contains a group of users who are authorized to use sudo.

There are two ways to add you to sudoers list.

The first method is to add you to the Linux group named sudo. This special Linux group is pre-configured to be able to use sudo. Thus once you are in the group, you can run sudo command.

The following command will add you to sudo Linux group. Make sure to run the command as the root.

Now confirm that your group membership has been updated. Use groups command to see a list of groups you currently belong to. The list must include sudo group.

The second method to enable you to use sudo is to add yourself to /etc/sudoers configuration file directly.

To change /etc/sudoers file, you can use a special sudo editor command called visudo. Simply invoke the following command as the root.

This will open up /etc/sudoers file for editing. Append the following line to the end of the file, and press Ctrl+x. When prompted, save the change, and exit.

This change will be effective immediately, and you will be able to use sudo right away. 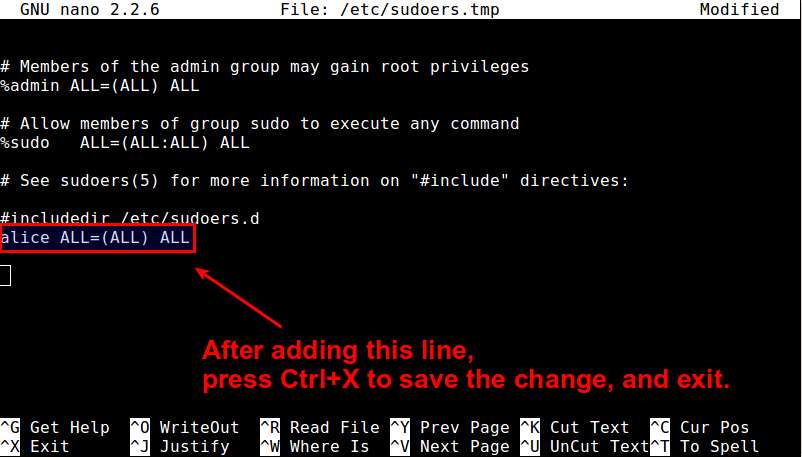