How to enable logging in Open vSwitch for debugging and troubleshooting

Question: I am trying to troubleshoot my Open vSwitch deployment. For that I would like to inspect its debug messages generated by its built-in logging mechanism. How can I enable logging in Open vSwitch, and change its logging level (e.g., to INFO/DEBUG level) to check more detailed debug information?

Open vSwitch (OVS) is the most popular open-source implementation of virtual switch on the Linux platform. As the today's data centers increasingly rely on the software-defined network (SDN) architecture, OVS is fastly adopted as the de-facto standard network element in data center's SDN deployments.

Open vSwitch has a built-in logging mechanism called VLOG. The VLOG facility allows one to enable and customize logging within various components of the switch. The logging information generated by VLOG can be sent to a combination of console, syslog and a separate log file for inspection. You can configure OVS logging dynamically at run-time with a command-line tool called ovs-appctl. 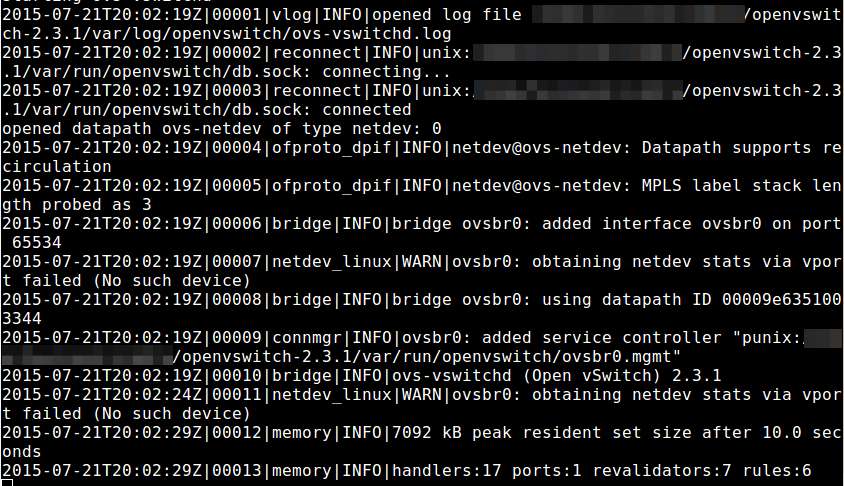 Here is how to enable logging and customize logging levels in Open vSwitch with ovs-appctl.

The syntax of ovs-appctl to customize VLOG is as follows.

In OVS source code, module name is defined in each source file in the form of:

For example, in lib/netdev.c, you will see:

In OVS source code, there are multiple severity levels used to define several different kinds of logging messages: VLOG_INFO() for informational, VLOG_WARN() for warning, VLOG_ERR() for error, VLOG_DBG() for debugging, VLOG_EMERG for emergency. Logging level and facility determine which logging messages are sent where.

To see a full list of available modules, facilities, and their respective logging levels, run the following commands. This command must be invoked after you have started OVS.

The output shows the debug levels of each module for three different facilities (console, syslog, file). By default, all modules have their logging level set to INFO.

Given any one OVS module, you can selectively change the debug level of any particular facility. For example, if you want to see more detailed debug messages of dpif module at the console screen, run the following command.

You will see that dpif module's console facility has changed its logging level to DBG. The logging level of two other facilities, syslog and file, remains unchanged. 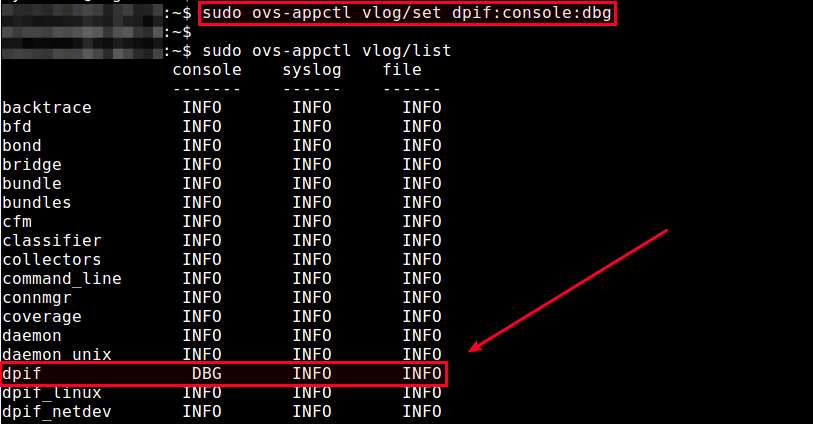