How to create a cloud-based encrypted file system on Linux

Commercial cloud storage services such as Amazon S3 and Google Cloud Storage offer highly available, scalable, infinite-capacity object store at affordable costs. To accelerate wide adoption of their cloud offerings, these providers are fostering rich developer ecosystems around their products based on well-defined APIs and SDKs. Cloud-backed file systems are one popular by-product of such active developer communities, for which several open-source implementations exist.

S3QL is one of the most popular open-source cloud-based file systems. It is a FUSE-based file system backed by several commercial or open-source cloud storages, such as Amazon S3, Google Cloud Storage, Rackspace CloudFiles, or OpenStack. As a full featured file system, S3QL boasts of a number of powerful capabilities, such as unlimited capacity, up to 2TB file sizes, compression, UNIX attributes, encryption, snapshots with copy-on-write, immutable trees, de-duplication, hardlink/symlink support, etc. Any bytes written to an S3QL file system are compressed/encrypted locally before being transmitted to cloud backend. When you attempt to read contents stored in an S3QL file system, the corresponding objects are downloaded from cloud (if not in the local cache), and decrypted/uncompressed on the fly.

To be clear, S3QL does have limitations. For example, you cannot mount the same S3FS file system on several computers simultaneously, but only once at a time. Also, no ACL (access control list) support is available.

In this tutorial, I am going to describe how to set up an encrypted file system on top of Amazon S3, using S3QL. As an example use case, I will also demonstrate how to run rsync backup tool on top of a mounted S3QL file system.

To use this tutorial, you will need to create an Amazon AWS account (sign up is free, but requires a valid credit card).

For best performance, choose a region which is geographically closest to you.

S3QL is available as a pre-built package on most Linux distros.

On Debian, Ubuntu or Linux Mint:

On Arch Linux, use AUR.

Configure S3QL for the First Time

The AWS S3 bucket that you specify should be created via AWS management console beforehand.

Make the authinfo2 file readable to you only for security.

You are now ready to create an S3QL file system on top of AWS S3.

You will be asked to enter an encryption passphrase. Type the same passphrase as you defined in ~/.s3ql/autoinfo2 (under fs-passphrase).

If a new file system was created successfully, you will see the following output. 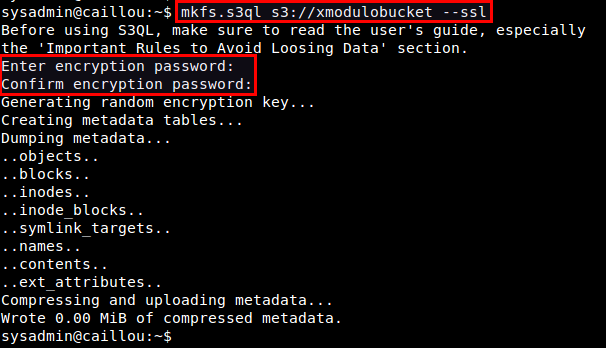 Once you created an S3QL file system, the next step is to mount it.

First, create a local mount point, and then use mount.s3ql command to mount an S3QL file system.

You do not need privileged access to mount an S3QL file system. Just make sure that you have write access to the local mount point.

To allow other users than you to access a mounted S3QL file system, use --allow-other option.

If you want to export a mounted S3QL file system to other machines over NFS, use --nfs option.

After running mount.s3ql, check if the S3QL file system is successfully mounted:

To unmount an S3QL file system (with potentially uncommitted data) safely, use umount.s3ql command. It will wait until all data (including the one in local file system cache) has been successfully transferred and written to backend servers. Depending on the amount of write-pending data, this process can take some time.

To view S3QL file system statistics, you can use s3qlstat command, which shows information such as total data/metadata size, de-duplication and compression ratio.

You can check and repair an S3QL file system with fsck.s3ql command. Similar to fsck command, the file system being checked needs to be unmounted first.

Let me conclude this tutorial with one popular use case of S3QL: local file system backup. For this, I recommend using rsync incremental backup tool especially because S3QL comes with a rsync wrapper script (/usr/lib/s3ql/pcp.py). This script allows you to recursively copy a source tree to a S3QL destination using multiple rsync processes. 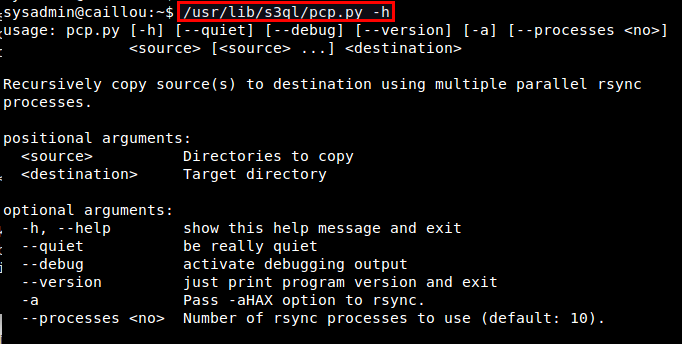 The following command will back up everything in ~/Documents to an S3QL file system via four concurrent rsync connections.

The files will first be copied to the local file cache, and then gradually flushed to the backend servers over time in the background.

For more information about S3QL such as automatic mounting, snapshotting, immuntable trees, I strongly recommend checking out the official user's guide. Let me know what you think of S3QL. Share your experience with any other tools.