How to check memory usage on Linux

Question: I would like to monitor memory usage on my Linux system. What are the available GUI-based or command-line tools for checking current memory usage of Linux?

When it comes to optimizing the performance of a Linux system, physical memory is the single most important factor. Naturally, Linux offers a wealth of options to monitor the usage of the precious memory resource. Different tools vary in terms of their monitoring granularity (e.g., system-wide, per-process, per-user), interface (e.g., GUI, command-line, ncurses) or running mode (e.g., interactive, batch mode).

Here is a non-exhaustive list of GUI or command-line tools to choose from to check used and free memory on Linux platform.

The simpliest method to check RAM usage is via /proc/meminfo. This dynamically updated virtual file is actually the source of information displayed by many other memory related tools such as free, top and ps tools. From the amount of available/free physical memory to the amount of buffer waiting to be or being written back to disk, /proc/meminfo has everything you want to know about system memory usage. Process-specific memory information is also available from /proc/<pid>/statm and /proc/<pid>/status

The atop command is an ncurses-based interactive system and process monitor for terminal environments. It shows a dynamically-updated summary of system resources (CPU, memory, network, I/O, kernel), with colorized warnings in case of high system load. It also offers a top-like view of processes (or users) along with their resource usage, so that system admin can tell which processes or users are responsible for system load. Reported memory statistics include total/free memory, cached/buffer memory and committed virtual memory.

The free command is a quick and easy way to get an overview of memory usage gleaned from /proc/meminfo. It shows a snapshot of total/free physical memory and swap space of the system, as well as used/free buffer space in the kernel.

GNOME System Monitor is a GUI application that shows a short history of system resource utilization for CPU, memory, swap space and network. It also offers a process view of CPU and memory usage.

The htop command is an ncurses-based interactive processor viewer which shows per-process memory usage in real time. It can report resident memory size (RSS), total program size in memory, library size, shared page size, and dirty page size for all running processes. You can scroll the (sorted) list of processes horizontally or vertically. 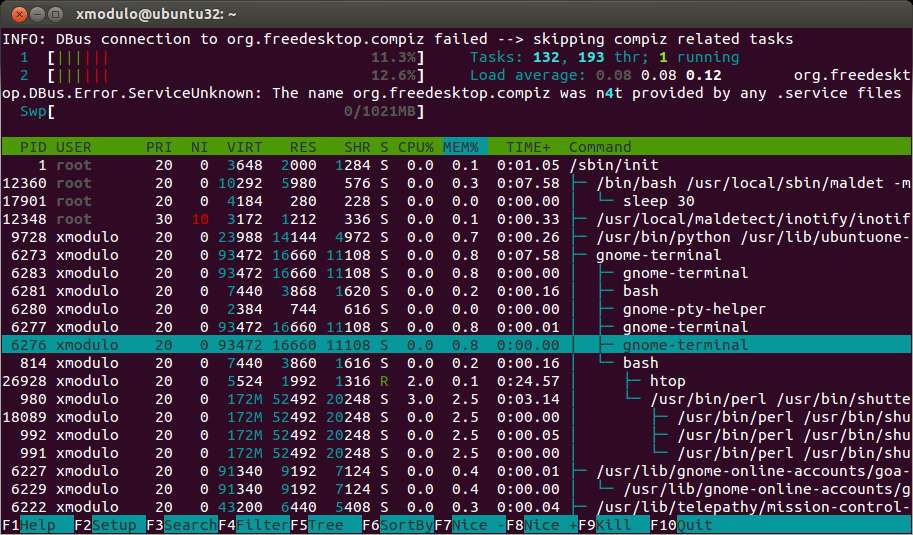 While GNOME desktop has GNOME System Monitor, KDE desktop has its own counterpart: KDE System Monitor. Its functionality is mostly similar to GNOME version, i.e., showing a real-time history of system resource usage, as well as a process list along with per-process CPU/memory consumption.

The nmon utility is an ncurses-based system benchmark tool which can monitor CPU, memory, disk I/O, kernel, filesystem and network resources in interactive mode. As for memory usage, it can show information such as total/free memory, swap space, buffer/cached memory, virtual memory page in/out statistics, all in real time. 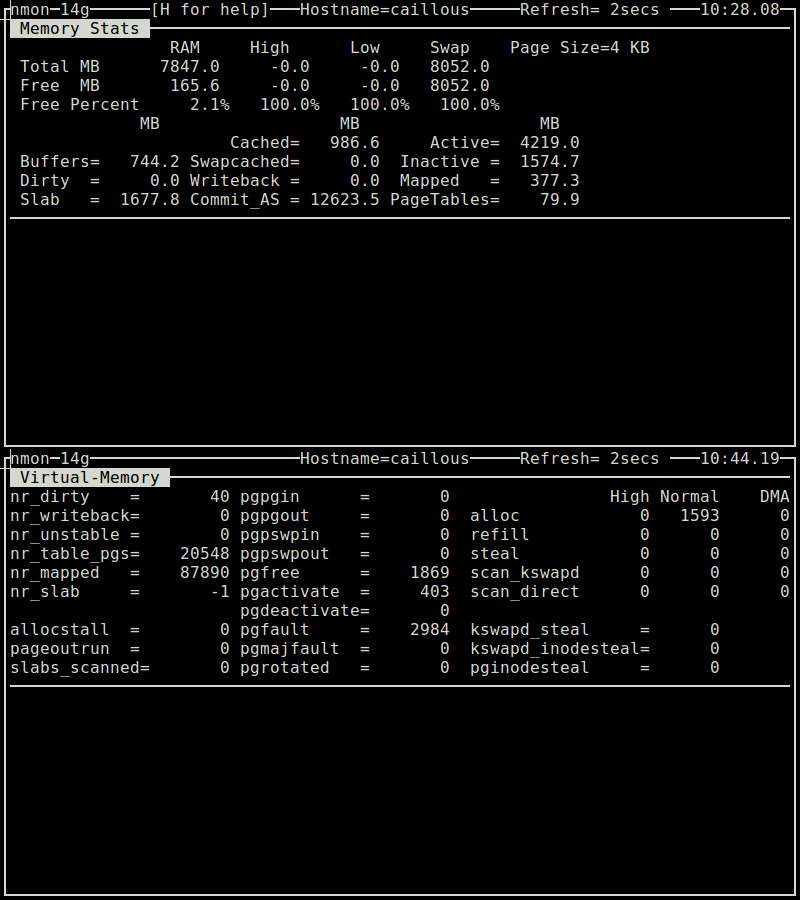 The smem command allows you to measure physical memory usage by different processes and users based on information available from /proc. It utilizes proportional set size (PSS) metric to accurately quantify effective memory usage of Linux processes. Memory usage analysis can be exported to graphical charts such as bar and pie graphs. 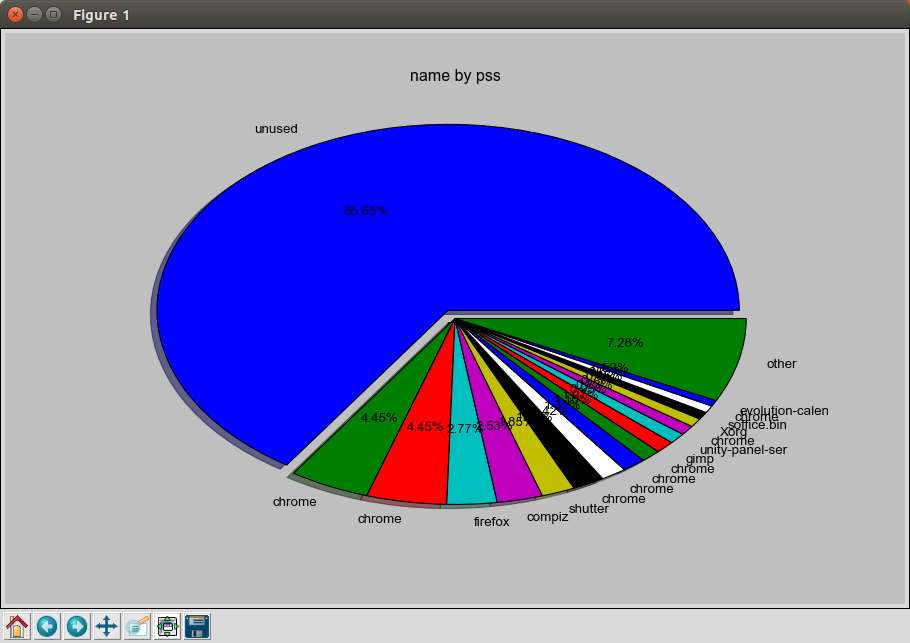 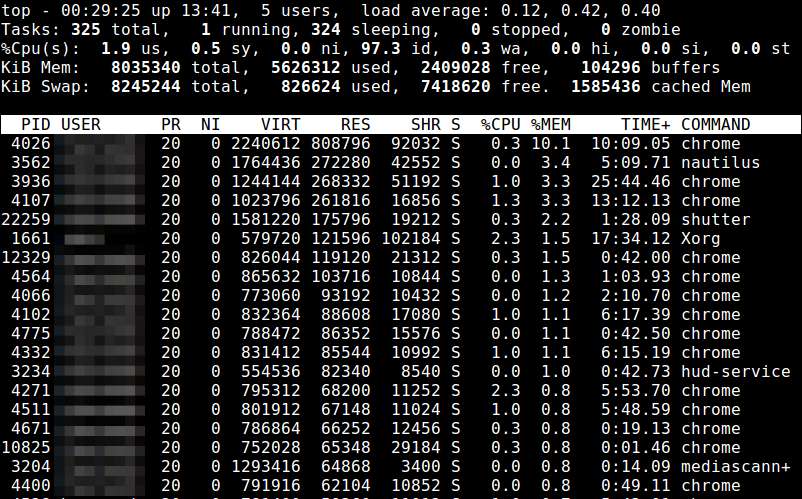 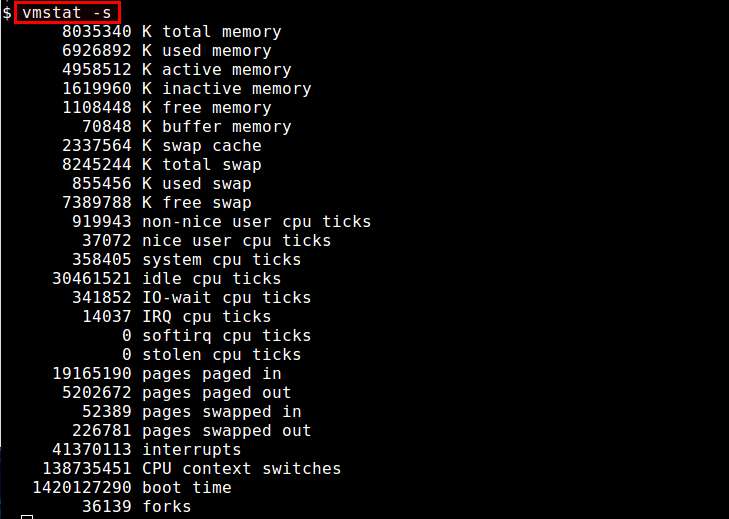