How to build a kernel module with DKMS on Linux

Suppose you wanted to install a device driver for a new graphics card, a WiFi dongle, or a network interface card that you purchased, and for whatever reason (e.g., missing prebuilt driver, outdated driver version, non-common build options), you decided to compile and install the driver module from the source. So you went ahead and downloaded the official source code of the device driver, compiled it against the kernel, installed and activated it. The new hardware is successfully recognized, and everything works fine.

How to solve this problem? Well, you need to re-compile the driver against the newer kernel and re-install it. Obviously it becomes quite cumbersome if you have to re-build the driver manually every time you upgrade your kernel.

This is when dynamic kernel module support (DKMS) comes in handy. The DKMS framework enables you to automatically re-build kernel modules into the current kernel tree as you upgrade your kernel. Hardware vendors often distribute their hardware's device driver as a DKMS package, so that users can auto-update the installed driver while they upgrade to a newer kernel. As an end-user you can easily configure DKMS to auto-update any custom device driver or kernel module that resides outside the stock kernel tree.

In this tutorial, I will demonstrate how to auto-build a kernel module with DKMS on Linux.

You can install DKMS on various Linux distros as follows. As part of DKMS installation, necessary build tools (e.g., gcc, make) and kernel headers will also be installed by the distro's package manager.

Install DKMS on Ubuntu, Debian or or Linux Mint

Install DKMS on CentOS or RHEL

Auto-Build a Kernel Module with DKMS

In this tutorial, I will use ixgbe Intel NIC driver as an example kernel module.

First, download and install the source code of the driver under /usr/src/<driver-name>-<version>.

Create the following dkms.conf file under this directory as follows.

Next, add the module to the kernel tree.

Build the specified module against the currently running kernel.

Finally, install the module under the current kernel tree. 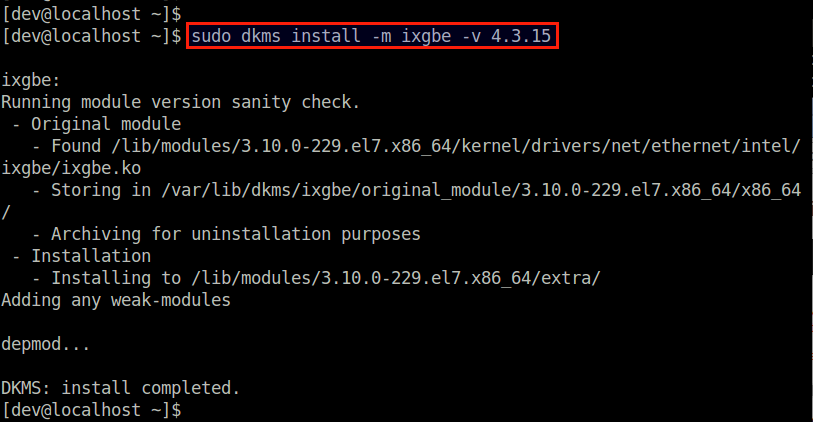 At this point, the kernel module should be successfully installed. You can check the status of the module with:

Verify Auto-Build of a Kernel Module during Kernel Upgrade

Before upgrading the kernel, check the version of ixgbe driver and the kernel.

Now go ahead and install a newer kernel and matching header files.

After rebooting into the new kernel, check the module information of ixgbe driver again.

You should see that the ixgbe driver of the same version has automatically been built for a new kernel 3.10.0-327.

For example, the following is the result of upgrading to a new kernel without matching kernel headers, where you can see that the new kernel loaded a stock ixgbe driver whose version is a little outdated.

You can always re-build the custom driver at any time by triggering DKMS manually as follows. Be sure to install matching kernel headers first.

In this post I demonstrated how to use DKMS to auto-build a kernel module. Granted, DKMS may not always be preferred especially in production Linux environments where development packages and build tools are typically not allowed. But for development environments or personal desktop, if you have any custom-built kernel module, DKMS makes your life easy by keeping the module updated against new kernels.