How to boot into command line on Ubuntu or Debian

Question: I am running Ubuntu desktop, but I want to boot straight into text-mode console temporarily. What is a convenient way to disable desktop GUI and boot into a terminal?

Linux desktop comes with a display manager (e.g., GDM, KDM, LightDM), which lets the desktop machine automatically boot into a GUI-based login environment. However, what if you want to disable GUI and boot straight into a text-mode console? For example, you are troubleshooting desktop related issues, or want to run a heavy-duty application that does not require desktop GUI.

Note that you can temporarily switch from desktop GUI to a virtual console by pressing Ctrl+Alt+F1 to F6. However, in this case your desktop GUI will be still running in the background, and thus is different from pure text-mode booting.

Here is how to enable text-mode booting on Ubuntu or Debian desktop.

If you want to boot into command-line permanently, you need to update GRUB configuration which defines kernel booting parameters.

Open a default GRUB config file with a text editor.

Look for a line that starts with GRUB_CMDLINE_LINUX_DEFAULT, and comment out that line by prepending # sign. This will disable the initial splash screen, and enable verbose mode (i.e., showing the detailed booting procedure).

Next, uncomment the line that says #GRUB_TERMINAL=console.

The updated GRUB defult configuration looks like the following.

Now use update-grub command to re-generate a GRUB2 config file in /boot based on these changes.

If your desktop uses systemd (e.g., for Debian 8 or later or Ubuntu 15.04 or later), there is one additional step needed. That is to change the default target from graphical target to multi-user target. Skip this step if your desktop does not use systemd.

At this point, your desktop should boot into the command line when you reboot it.

Later you can always revert to desktop boot later by restoring GRUB config file and running:

If you want to disable desktop GUI and boot in text-mode just one-time, you can use GRUB menu interface. This works only for Debian 7 or earlier or Ubuntu 14.10 or earlier, where systemd is not enabled.

First, power on your desktop. When you see the initial GRUB menu, press e. 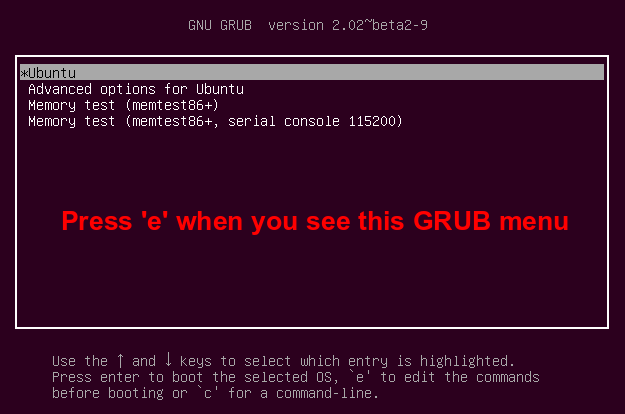 This will lead you to the next screen, where you can modify kernel booting parameters. Scroll down the screen to look for a line that begins with linux, which indicates a list of kernel parameters. Remove from the list quiet and splash. Add text in the list instead. 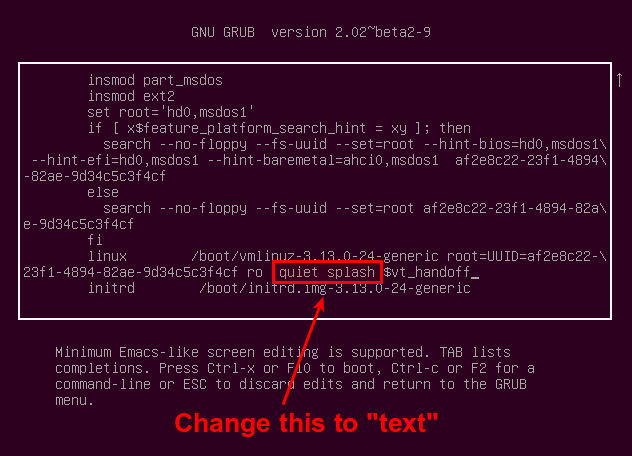 The updated kernel parameter list looks like the following. Press Ctrl+x to continue booting. This will enable one-time console booting in verbose mode.