How to perform BGP traffic engineering using Quagga on Linux

The previous tutorials demonstrated how we can turn a CentOS box into a BGP router and filter BGP prefixes using Quagga. Now that we understand basic BGP configuration, we will examine in this tutorial how to perform more advanced traffic engineering on Quagga. More specifically, we will show how we can influence the routing path of existing traffic by tuning BGP attributes (e.g., local preference).

In a typical Internet environment where multiple routing paths exist from a source to a destination, the actual path taken by traffic is the result of diligent traffic engineering which involves multiple factors, including the number of router/AS hops in the path, bandwidth capacity, path reliability, congestion in the path, and so on.

To be more specific, a routing path chosen by traffic is shaped by individual routing decisions made by each intermediate router based on its local routing table. The routes stored in the routing table may be statically configured, learnt by IGP like OSPF or EIGRP, or learnt by BGP. A single route can be learnt by more than one protocol. In such a case, the preferred route depends generally on some protocol-specific attribute, for example, prefix length and administrative distance. In BGP world, we can influence path decision process by tuning BGP attributes such as local preference in BGP routers.

In BGP, IPv4 and IPv6 prefixes are propagated globally over the Internet through prefix advertisements sent to and received from BGP neighbors. When multiple routes are received for a particular prefix, your local BGP router will make a decision to forward traffic destinted to that prefix via one of the routes. Similarly, a remote router will make its own routing decisions based on the prefixes that it learns from others, and some of those prefixes may be advertised by yourself. The remote router will send traffic to you if it chooses the route you advertised, as the best route for a given prefix.

BGP is one of the most highly customizable routing protocols. In case the same prefix is received from more than one neighbor (with distinct routes/paths), many BGP attributes are considered in selecting the best path for that prefix, as documented here.

In the following sections, we will discuss how we can tune some of these attributes to influence BGP path selection process.

For this tutorial, we will consider the following topology.

To keep this tutorial simple, we will not be going into the details of BGP configuration. I am providing the summary of the configuration for reference.

The route taken by outbound traffic from Router-A will depend on the prefixes it receives from Router-B and Router-C. While we assume that we are allowed to configure Router-A only, we need to have Router-D advertise prefixes to Router-A for the purpose of demonstration. We will start by configuring Router-D to advertise its own prefixes.

Please note that AS-200 and AS-300 are transit networks. Since there is no active prefix filter defined, these networks will forward all prefixes that they learn to their neighbors. 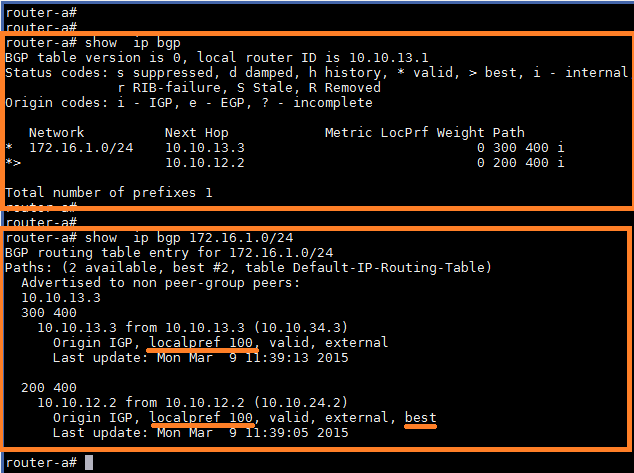 The above commands create a route-map named SET-LP. The sequence 10 of the route-map is a permit statement. As there is no specific match clause, the statement will match all prefixes. The set clause will set the local prefix of all prefixes to 200, which is higher than the default value. We then call this route-map within BGP configuration and apply it in the inbound direction for neighbor 10.10.13.3, Router-C.

Let's verify that the changes have taken effect. 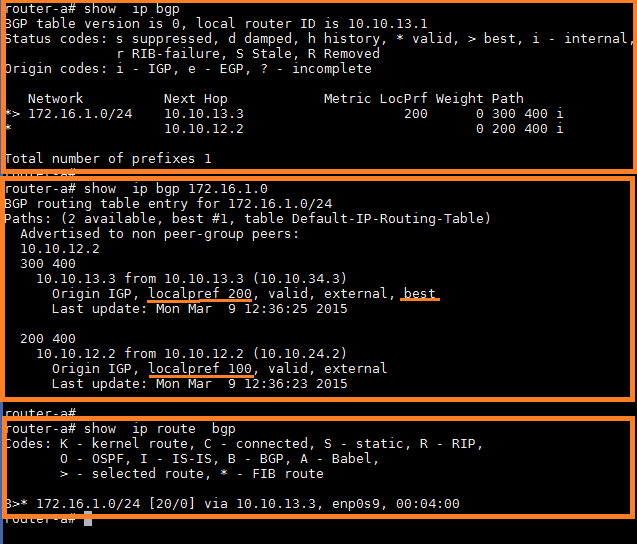 We can interpret the above output as follows.

This confirms that we have successfully configured outbound traffic policy to match the requirement. traceroute probing should confirm the same.

Note: If your ping/traceroute is not working, make sure that you have enabled packet forwarding in all four routers.

As far as inbound traffic is concerned, of course we cannot directly manipulate remote routers outside the local AS to influence inbound traffic sent by them. Instead, incoming traffic to an AS can be indirectly influenced by the prefixes that the AS advertise to the world. Remember that the routing tables of remote routers are populated with the prefix advertisements they receive. Thus by selectivey advertising prefixes from our local Router-A, we can influence the routing decision of the neighboring Router-D.

One key factor during route selection in any routing protocol (RIP, OSPF, BGP, IS-IS) is the prefix length. The route with the longest prefix is always the best route, regardless of any protocol-specific administrative distance, attribute, or metric. For example, a prefix with /27 mask is always preferred over /24 mask as it has a longer prefix length.

We will utilize this characteristic of route selection to load balance Router-A's incoming traffic through Router-B and Router-C. Let us look at the prefix that AS 100 owns, and see how we can break it up.

In a lab environment, you can use any prefix length that you want including /32. However, in production environments like publicly routable prefixes, the maximum length of prefix that is allowed is up to /24. For this simulation, we will advertise the /24 and /22 prefixes using the following policy.

1. Load Balancing and Fall Back Selection

The following is the prefix selection process on Router-A, which leads to load balancing its incoming traffic.

The above commands will create a prefix-list called AS200_PRFX_OUT that will deny the specific /23 and /24 prefixes, while allowing all other prefixes within the 192.168.0.0/22 subnet as long as the prefix length is up to /24. We will create a similar prefix-list for the other /24 prefixes.

We will call upon the prefix-lists within route-maps and apply them in the BGP configuration.

The above commands create two route-maps that allow prefixes that are matched by the prefix-lists that we created earlier.

In the above BGP configuration, we specify that the outbound prefixes advertised towards the neighbors in AS 200 and AS 300 must be filtered through the route-maps that we have just created.

Now we will advertise the prefixes within BGP configuration.

We will verify whether the prefixes are advertised as well as received properly by using the following commands.

The following screenshot confirms that the routes are being advertised and received properly.

To test whether fallback mechanism works, we will shut down the BGP peering within Route-A and Router-C.

As we can see, the route /22 is still being learnt through AS 200. We can use traceroute to verify that the traffic is taking a backup path.

Note: If your ping/traceroute is not working, make sure you have enabled packet forwarding in all four routers.

For your reference, here is the final configuration of all four routers.

To sum up, we have demonstrated some techniques of BGP traffic engineering to influence inbound and outbound traffic. If we know how we want to route traffic or prepare backup routes for redundancies, there are a lot of options to make it work using BGP, e.g., weight, local preference, AS-path prepend, communities, MED, etc. Traffic engineering can be done using other protocols as well. Remember that the core of proper traffic engineering is planning. At the end of the day, it is planning that is the most important phase. Executing the plan (as demonstrated in this tutorial) is what comes next.