How to add disks to LVM volume on Linux

Question: I have new unused hard drives, and want to add them to an existing LVM volume to increase its size. How can I add disks to LVM to extend an LVM volume?

The biggest advantage of LVM over traditional disk partitions is its support for dynamic partitions; you can create and resize (grow or shrink) LVM volumes dynamically as needed. There is no notion of physical disk boundary in LVM logical volumes, so you can create a large LVM volume that spans across multiple smaller physical disks. Such flexible partitioning allows you to manage storage space more efficiently as disk usage patterns change over time.

If you want to add new disks to an existing LVM volume to expand its size, you can easily do it, and here is how.

First, use fdisk to check what disks you have on your system.

In this example, three disks are detected (/dev/sda, /dev/sdb, /dev/sdc). The first disk (/dev/sda) is used by LVM, while the other two (/dev/sdb and /dev/sdc) are not added to LVM, and do not have any partition in them.

In the example, one volume group (yoda-vg) exists, and two logical volumes (root and swap) are created in this volume group.

According to the df output, the root logical volume is mapped to /dev/mapper/yoda--vg-root by the device mapper.

Using this information, I will show how to add two disks /dev/sdb and /dev/sdc to the root logical volume in the rest of the tutorial.

Create a primary-type partition which takes up the whole disk (2TB). 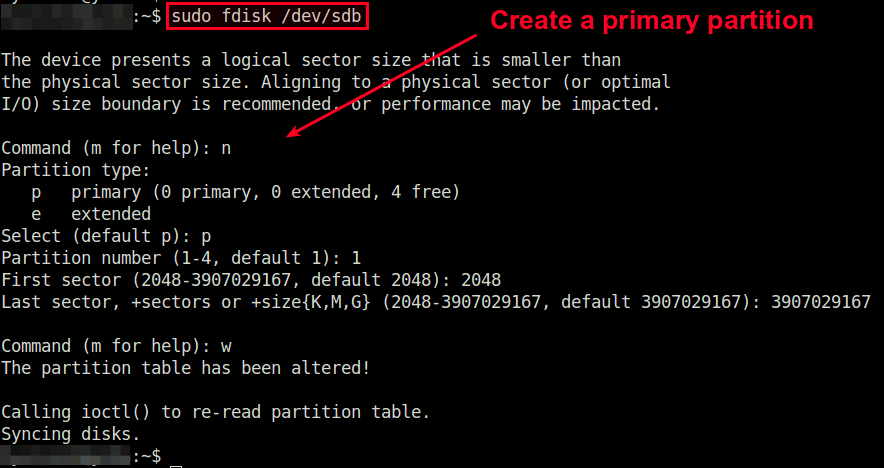 Repeat the same step with /dev/sdc.

Use fdisk to verify newly created partitions (/dev/sdb1 and /dev/sdc1).

Next, create a physical volume on each new disk partition (/dev/sdb1 and /dev/sdc1).

If you haven't created any partition on each disk, run the following commands instead.

Next, find the volume group which contains the logical volume to expand, and extend the group by adding newly created physical volumes to it.

In our example, the root logical volume belongs to the yoda-vg volume group. Let's add a physical volume /dev/sdb1 to this group first.

Again, if there is no partition in /dev/sdb, the following command instead.

Given the resized volume group, now extend the root logical volume itself:

The above command tells the root logical volume to use all available additional free space in its volume group. Note that /dev/yoda-vg/root is the device the root volume is mapped to.

The final step is to enlarge the filesystem created inside the root volume. Otherwise, the filesystem will not recognize additional free space in the volume.

The resize2fs command supports resizing ext2/ext3/ext4 filesystems. It also supports online resizing in case you expand a filesystem. No need to unmount the filesystem.

At this point, the filesystem should be expanded to take up 100% of the resized root logical volume. 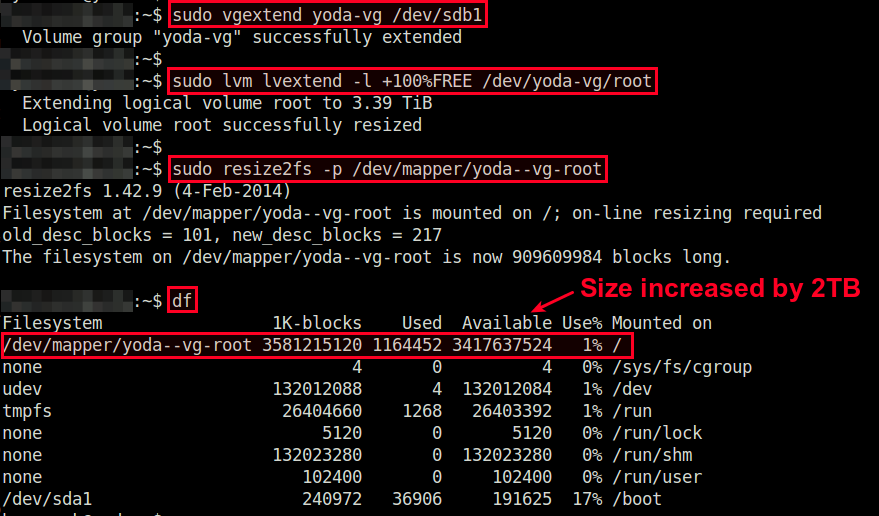 Repeat the step three with /dev/sdc.